Van Persie and Rooney to miss United's trip to Chelsea 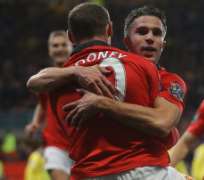 
Manchester United will again be without Wayne Rooney and Robin van Persie when they go to Chelsea on Sunday.

Rooney is back in England following warm-weather training, but his groin injury has not healed in time for the weekend.

And van Persie, who has played just twice since November 10, will not return to training until next week - by which time United could be 14 points off top spot in the Premier League.

Speaking at his press conference ahead of Sunday's trip to London, Moyes said: 'Wayne's come back fresh but not ready for Chelsea.

'He's doing some running and looking good. He's had a break, done some strengthening work on his groin. Hopefully he'll benefit, but not for this game.' Sky Sports