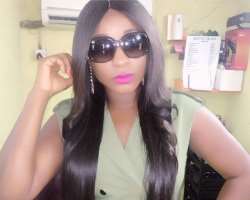 Star actress, Ini Edo has berated some fraudsters on Facebook using her name to dupe some of her teeming fans. She disclosed that her Facebook and Twitter accounts have been compromised and warned her fans to disregard any post asking to part with their hard-earned money.

The Akwa-Ibom-born screen diva sent out this warning message in a broadcast on blackberry and warned the criminals to desist from such acts.

"My attention has just been drawn to some fraudulent acts being perpetrated by some criminals using my social media accounts; Facebook and Twitter, they have been compromised.

"I'm hereby warning these fraudsters to desist from these acts and advising my fans and unsuspecting members of the public to be vigilant so they don't fall victims. I have not asked anybody on Facebook or Twitter to pay money into any account. Please be careful.

"Kindly rbc (re-broadcast) this broadcast till it spreads. Thank you. signed Ini Edo."