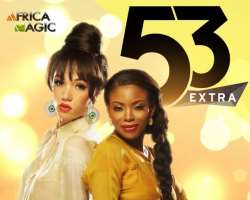 'Britain's Next Top Model' finalist, Eku Edewor has said that there was no time she fought with her former co-presenter, Dolapo Oni. There have been rumour that the duo fell apart due to strains in their relationship.

For the ardent viewers of MNET's Studio 53 Extra programme, Edewor and Dolapo held their viewers spellbound when both anchored the show, but now, Dolapo is no more presenting the show with Edewor.

Speaking on Rubbin' Minds on Channels TV recently, Edewor, who has now ventured into Nollywood and stage drama, disclosed that she had a real bonding with Dolapo while they both worked together.

She explained that since they both had different activities they were involved with, in pursuit of their dreams, they had to make such dreams come true, which resulted into Dolapo leaving.

Sierra Leone Woman, Linda Ngaujah Takes a Visit to Heaven and Hell | Jesus Asks Her to Warn Pastor Adeboye and Pastor Kumuyi | Also Takes Back Messages From Gaddaffi and More (MUST WATCH)

Femi Fani-Kayode - 'AN ODE TO JEZEBEL

PHOTOS: Ngozi Ezeonu Flaunts Her New Slim Figure And She Is Insisting She's Not Sick