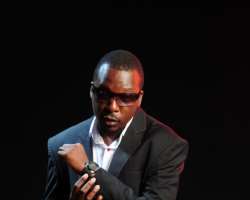 Fast rising rapper, Olasunkanmi Pedro a.k.a Kay-L may not have a jersey in the bandwagon of similar sounding rappers of the moment but his originality and positivity makes him a veritable potential to keep an eye on as time unfolds. His singles “Razz Butter Boy” and “Oloja Selling” speak volumes of what his intensions are for the local music scene. According to him, “My mission is to infuse moral values into the ears of young people with my music”.

In a bid to project his mission, he consulted the expertise of ace cinematographer, DJ Tee to direct the video for “Oloja Selling”. The video, which premiered last week, is already enjoying massive airplay and sitting comfortably on Nigezie's top 9 music videos.
Kay-L's music is a fusion of English and pidgin, which according to him, makes it easier to cut across to every listener out there. “My rap and singing ability is attracting people from the streets and the mansion. I preach morals while we all dance to the groove”.
Kay-L's upcoming album will have 18 tracks featuring artistes like M.I, X-Souljah, Dagrin, Chinel and Ex-O. In his words, “the title of the album will be made public soon and I believe it will redirect the movement of rap music in Nigeria.