Yet another legislative profligacy – Guardian 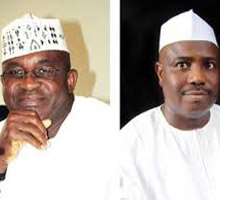 
Those who accuse the leadership of Nigeria of being excessively wasteful and insensitive to the deplorable condition of the citizenry are not only right, they have once again found justification in the recent approval granted by the Federal Executive Council for the purported expansion of the National Assembly complex at a cost of N40.2 billion. The projects, according to the Federal Capital Territory Minister, Bala Mohammed include a library, budget office, printing press, clinic, restaurants, banquet hall, places of worship, plenary hall, TV/radio/press/ facilities, fitness room, administrative offices, technical rooms, meeting rooms and upgrade of the two chambers. Looking at the component of the contract, it is arguable that some of the items are essential to the business of law-making or relevant to any functions ascribed to the legislature under the constitution. But even if they all are, the amount of N40.2 billion allocated to it is certainly on the high side.

And if at all the amount is appropriate, this is certainly not the best time to commit such a whopping sum of money to what is no more than a white elephant orchestrated principally to broaden the comfort zone of the parliamentarians. This happens in the face of debilitating infrastructural decay and poor funding which has continually emasculated and incapacitated the educational and health sectors, a factor that led to ASUU strike and the closure of universities for six months. The medical doctors also took their turn to embark on what was described as a warning strike which in turn led to the paralysis of hospitals and other health institutions with the likelihood that lives would invariably have been lost. It is, therefore, crass misplacement of priority to embark on yet another grandiose project.

Again, the National Assembly has proven that it can hardly be trusted in its claim as the representative of the people. It is highly unlikely that a National Assembly that feels the pulse of the people would see the construction of restaurant, banquet hall, fitness room and places of worship as important at this time when death attributable to hunger and water-borne diseases such as cholera and dysentery is still in this century, part of the national tragedy, while infant mortality remains relatively high in the country. Air transport considered to be the safest means has become a cheap source of multiple deaths arising from incessant mishaps and the attendant loss of lives. No amount of money spent to rescue the industry could ever have been too much. In fact, every critical sector of the country needs a lifeline and a major intervention, an obligation government has found difficult to discharge supposedly on account of lack of means to do so. The grudge of Nigerians is that government spends too much money on itself and its unwarranted indulgences.   Whereas when the basic interest of ordinary Nigerians is involved, or any project that will impact on the lives of an average citizen, government's disposition in most cases is that there is no money. Why should there be so much dichotomy between the standard of living of the ordinary citizens and those in government? Is it no longer the case that government exists for the sake of the people? Can a government that lavishes so much money on itself and the welfare of its members to the exclusion of its ordinary citizens genuinely claim to be a 'government of the people, by the people and for the people', which is the simple definition of democracy or what it stands for in practical terms?

Apart from its embarrassing propensity for profligacy, one other reason this government would approve such a project at this time is its desire to placate the National Assembly which has repeatedly shown itself thoroughly displeased with the executive branch. It is not in doubt that the relationship between the presidency and the National Assembly has been anything but cordial. Of course, an executive arm which approved for itself and committed funds to a big banquet hall at the State House when there is one in place already, would lack the moral right to withhold approval for a similar request from any of the other arms. What this means in the final analysis is that it is not the interest of Nigerians that holds sway in the determination of what projects to embark upon. It is purely the protection of the political interests of the key players in the political chess game. This is the monumental corruption in which Nigeria's leadership swims.