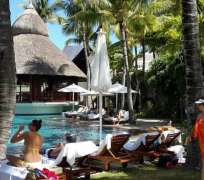 Last Christmas season was a bomb for Lola-Omotayo-Okoye who recently tied the knot with Peter Okoye of Psquare, went on a luxurious Christmas holiday with her kids.

She Lodged at the luxurious Le Touessrok in Mauritius, Lola has shared some of the photos from her holiday. She also shared more photos of her son Cameron and Leonor whom she introduced some few days back as his girlfriend.