Eagles to play grade A South America team in March 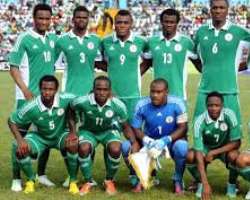 
The Nigerian Football Federation said it is making arrangement for Super Eagles to play a top team from South America in March as part of its preparations for the 2014 World Cup That take place in Brasil in summer.

The NFF announced it was  close to finalising the arrangement for the match  scheduled for FIFA window on March 5th.

Head of Technical Committee, Christopher Green said that the game against the unnamed top South American country is almost certain to happen on March 5.

“The NFF will make good use of the next FIFA free day for friendly matche on March 5th. We are discussing with a top South American country that I won’t like to reveal just yet. We are confident that the team will bring out the best in the Eagles ahead of our duel with Argentina in June,” Green was quoted to have said.