Protest as soldier beats bus driver to death in Lagos 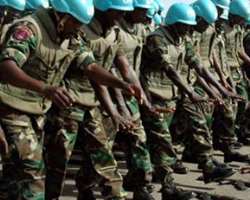 The suspect who is being detained at the 81 Division of the Nigerian Army,   Victoria Island,  Lagos, was arrested after an angry mob had stormed Dodan Barracks chanting war songs and threatening mayhem. It was learnt that disagreement broke out between the soldier and the deceased driver after Benjamin had refused to pay his transport fares despite entreaties from the bus conductor and passengers. Eyewitnesses said the soldier, who was not wearing uniform, was angered by the insistence of the driver that he had to pay up and in the heat of the ensuing altercation between them, he brought out his gun and hit the driver's head with its butt. In Lagos, military and paramilitary personnel always dodge paying transport fares whenever they board commercial buses, claiming they are staff. But the deceased driver  was said to have challenged the soldier because he was not wearing his military uniform neither did he identify himself as a soldier.

An eyewitness who identified himself as Femi Ogunlade told THISDAY that the deceased, who was the driver of the commercial bus with registration No. LSG 451 XG, had demanded the  transport fare from the soldier, after he  had snubbed the conductor. His persistent demand was said to have triggered off the soldier's anger and the argument  between them soon degenerated into a scuffle after the driver had parked his bus at Obalende in a bid to collect  the fare. In the heat of the arguments,  the soldier had hit the driver with the butt of his gun and when the latter slumped on the road, the soldier fled. Attempts to revive the driver proved abortive  and he was later confirmed dead at the  Lagos Island Hospital, where he was rushed to for treatment. His death angered some youths in the area who pursued the fleeing soldier and caught up with him close to Dodan Barracks. They were about lynching him when  he was rescued and taken to the Lion Building Police Station before he was handed over to the military for an orderly room trial, which has already been set up. A police source told THISDAY that it took the intervention of the Area Commander of Lion Building to restore normalcy in the area. He said the mob, whose  members were from the National Union of Road Transport Workers (NURTW), had mobilised others, demanding that the soldier be handed over to them so that he could be lynched. Meanwhile, three houses were yesterday gutted by an inferno at the Ijesha area of the state, destroying property worth millions of naira. Confirming the incident, the Spokesperson, South-west Zone of the National Emergency Management Agency (NEMA), Mr. Ibrahim Farinloye, said although no life was lost, some of the residents sustained varying degrees of injuries. The raging fire was finally put out by emergency responders, including the firemen.