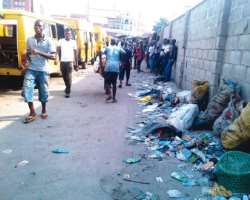 
There was pandemonium on Monday morning at the Obalende bus terminus at the Obalende, Ikoyi area of Lagos State after a yet-to-be-identified soldier killed a commercial bus driver, Bashiru Adebayo.

Eyewitnesses say the soldier killed the 34-year-old over an argument on N100 transport fare.

An eyewitness, Abdulrasheed Ajagun, said the soldier had accompanied a woman to the bus park and had left when the argument started.

He said, 'The soldier was in mufti, so nobody knew he was a soldier. He came to the park with the woman and she boarded one of the buses going to Yaba.

'The bus conductor told the woman she would pay N150 for the normal fare and N100 for the three bags she had in the boot.

'After arguing that she would not pay, she decided to call her soldier friend on the telephone. He came back to the park and started querying the conductor over the N100.

'The driver, who was calling passengers into the bus, heard their argument and went to intervene.

'Before anyone knew what was happening, the soldier had held him (driver) by his shirt and started slapping him. As we all begged him to leave him alone, he gave the driver a blow in the neck. He slumped.

'Not satisfied, he stamped his foot on him. The danfo driver died right there.'

A mob was said to have quickly gathered around the area, while the soldier was seized and beaten up.

Some policemen monitoring traffic within the vicinity were said to have rescued the soldier from the irate mob.

However, another eye witness, Christian Chukwu who is also a driver, said the woman, who started the incident, ran to Dodan Barracks and mobilised other soldiers who descended on the people in the park.

He said, 'The soldiers beat up everyone without asking any question.

'A policeman, who wore the rank of a Deputy Superintendent of Police was also beaten up. The policeman was the one that held the soldier after he was rescued from the mob. They wanted to collect his gun, he refused and insisted the soldier must follow him to the station. They tore his clothes and removed his cap.

A reporter with Radio Nigeria, who was filming the scene, was also beaten up. His phones and gadgets were destroyed. The brother of the deceased, who held the corpse in his arms, was equally assaulted.'

It was gathered that some other soldiers later arrived at the scene and took away the killer soldier in an Audi car.

It was learnt that the corpse of the Oyo State indigene was taken to the General Hospital mortuary.

A friend of the late driver, who identified himself simply as Baba Ijebu, described the deceased as a gentle and peaceful man who in his 15 years in the park had never fought with anybody.

The Director, Army Public Relations Office, 81 Division, Lt. Col Omale Ochuagwuba, confirmed that the suspect had been arrested and investigations had begun.

The army spokesman promised that the matter would not be swept under the carpet.

He said, 'The soldier (suspect) said he was in mufti and was seeing his wife off at Obalende. His wife was billed to travel to the village and was boarding a commercial bus. His wife's belongings had been put into the bus but an argument ensued over the cost of transportation.

'The soldier told the driver that the price was too high and the driver threw the soldier's wife's bags out of the vehicle and he pushed the soldier and the two of them started fighting. The driver's colleagues joined hands and started beating up the soldier.

'The soldier's wife ran down to Dodan Barracks to report the matter, but by the time the soldiers got there, the bus driver was already dead.' - Punch.