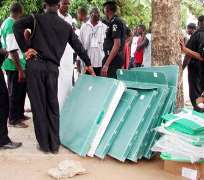 Dr Adekunle Ogunmola, the Resident Electoral Commissioner of INEC, Lagos State, on Wednesday, said the commission would not stagger the 2015 general elections to avoid the problems encountered in Anambra.

In an interview with the News Agency of Nigeria (NAN), Ogunmola said that the problem associated with that election was a blessing in disguise.

The INEC boss was reacting to calls by some sections of the society to stagger the 2015 elections.

'We are not staggering elections in 2015; having problems in Anambra does not mean that we will not be able to handle the 36 states of the federation plus the FCT.

'In fact, it is going to be a lot easier for us. But, I want to say that I see the problem associated with Anambra election as a blessing in disguise because we were thinking that it was going to be error-proof.

'And that would have made us to be a little bit complacent, thinking that everything is okay.

'We see this as an eye opener and it has compelled us to crosscheck our crossed T's and dotted I's again.

'Beyond that, we need to also point out that there is the problem of the people, who constitute electorate, being nonchalant about checking their names during display.''

On voter register, Ogunmola said that the commission had commenced de-duplication of double registrants ahead of 2015.

He disclosed that the number of registered voters in Lagos would drop.

'The figure for Lagos is going to drop because double registration will be removed and when we display, people will now be able to see whether their names are still there or not,'' he said.

Ogunmola gave the electorate the assurance that continuous voter registration would afford them the opportunity to register so that their data would be recorded.

He said those who registered twice following the commission's own instructions to them would not be penalised and would be given the opportunity of registering normally so as to capture their full details.

On voter apathy, the commissioner argued that it would not solely be the responsibility of INEC to remove apathy as witnessed in Anambra.

'The contestants and the parties are the ones looking for votes, so they should also be involved in mobilising people for election,'' he said.

Ogunmola however gave the commission's to do its best noting that 'most of the funds we demand for election are spent on training and educating our officers on how to enlighten the people''.

'That is why I do not blame people that are complaining about the amount INEC estimated for 2015 election because they have little knowledge about its operations.'' he said (NAN)