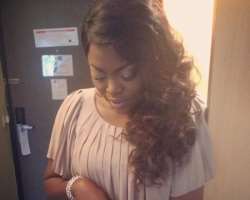 Star actress, Funke Akindele has called on her teeming fans not to fall victims of some fraudsters on social media, who ask them to part with their hard-earned money.

According to what we gathered, some set of people have been going about on the internet requesting unsuspecting fans of the actress to pay money into some bank accounts to appear in a movie production by the sultry actress.

Also, another impostor on Facebook promised some unsuspecting fans penultimate week that laptops and Blackberries would be given to them (fans) as Christmas and New Year gifts.

“Good evening to all my fans out there all over the world, I thank you all for all your support, for that, I will be giving out Blackberry and laptops to some of my fans on Facebook as Xmas/New Year gifts. Like this status if you are interested. No comment please. If you have received your gift before, please do not comment to avoid double claim of prize. (I) love you my great fans,” the 'fake' Funke Akindele wrote on Facebook penultimate Thursday.

However, Nollywoodgists.com contacted a representative of the actress, Ayo Ola Mohammed, who told us to disregard the post as it does not come from Funke.

Responding to us via email, after a phone chat, Ayo said that Funke has warned her fans never to part with their money or fall victims of these impostors. She confirmed to Nollywoodgists.com that Funke Akindele has reached her friends' limit of Facebook.

Funke Akindele also warned that fans should “beware of certain Mark Kelechi who has been asking people to pay into his account to partake in Funke Akindele's movie productions. This is false. We run a school of drama (Scene One School of Drama) and admission details about the school will be out soon. Please do not pay anyone to be part of my productions.

"In addition, I'm not giving out any gifts. Beware of fraudsters like Kelechi on social media. Here is his number, 08176828172 and email address is [email protected] Thank you.”

In a related development, a purported Chidinma Ekile's Facebook page has promised to dole out gift items to fans, just like the 'fake' Funke Akindele. As at press time, Nollywoodgists.com was unable to reach Chidinma to get her reaction on this development.