Actor Jim Iyke Involved in A Street Fight In Ghana Over $10,000 And Was Allegedly Arrested! 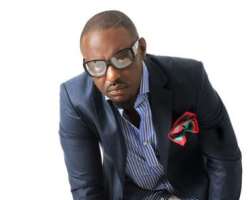 Hmmm...I just hope this isn't true but from what was gathered, Nigerian movie star, Jim Iyke, was involved in a brawl yesterday at the Crave Cafe at Adjiringanor, East Legon in Accra.

According to the way it was reported in an online media it said:

'An eyewitness explained that, some people were eating at the cafe at about 5pm when a stout gentleman in a black Range Rover with a Nigerian number plate parked by the cafe.

Arriving in his Sports Chevy with a Nigerian number plate 20 minutes later, Jim Iyke got engaged with the man in a heated argument over $10,000 which later turned into a nasty brawl on the street.

The eyewitness further explained that it became difficult for those around to separate the two, and at a point, Jim Ikye wanted to get into his car to pull out something which was suspected to be gun, but he was prevented by those at the cafe.

The other man left but returned shortly with two policemen, one in mufti and the other in uniform who arrested Jim Iyke and took him away.
But the eyewitness told The Ghanaian Times that barely 20 minutes later, the actor resurfaced at the venue, which created the impression the case had been “settled” by the two policemen.

The Legon Police Commander in a telephone conversation with the paper said, the men he dispatched to the scene after receiving information found that people around were reluctant to give the police in-depth account of what actually transpired and so they were unable to bring the two men to the police station.

I Don't Have Time For God- Mr. Solek