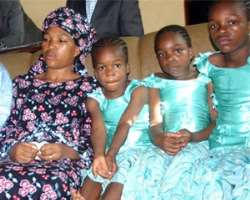 Blessing Bayo Ohu and four of her children. (Vanguard)
Listen to article Blessing Bayo Ohu and four of her children. (Vanguard)
The killers of Nigerian Editor Bayo Ohu are still a mystery, three weeks after his murder. Now the family of the former Guardian newspaper journalist lives in fear. Ohu was shot dead early on Sunday morning, September 20, by a gang of five armed men and a woman in his apartment in Egbeda, a Lagos suburb in Nigeria. His killers made away with his laptop and cell phone, raising speculation that he was killed for his work as a journalist. Nigerian Police Commissioner Marvel Akpoyido told CPJ that investigations are ongoing.

According to local news reports, Ohu was working on a sensitive story about the use of forged educational certificates by a recently appointed customs official. This was confirmed by his widow, who told CPJ that this information had been passed on to her by senior journalists at The Guardian.

The 31-year-old mother of five girls, aged 10 months to 16 years old, described her slain husband as “loving, caring, and with a passion for journalism,” which convinced her to take up journalism as a profession herself. Blessing Bayo Ohu recently spoke to CPJ about her husband, her security concerns, and her future plans.

CPJ: How would you describe your life with your husband over the years of your marriage?

Ohu: We lived a very humble and comfortable life to the best of our ability. He was a contented, hard-working man who did not desire to have what was beyond his means. Above all, my husband was a very loving, understanding, and caring father.

CPJ: How would you describe his personality?
Ohu: He was an indoor person who did not make many friends and chose those he related to with care. Bayo Ohu (AFP)
CPJ: Can you describe your last moments with your husband prior to his assassination?

Ohu: It was on a Sunday morning, so when I woke up, I told him I was going to church. Then I was called after 45 minutes by our neighbors and told about the incident.

CPJ: How did you react to the news?
Ohu: It was unbelievable for such a thing to have happened to my husband. I never imagined that he could die that kind of death.

CPJ: How do you feel about your security and that of your children?

Ohu: I am worried that the same people who ordered my husband killed may come for us. They may think that there is more evidence left with us that may reveal their identities.

CPJ: Since the burial of your husband, have the police been in touch with you?

Ohu: Yes, about a week ago. One of the police in charge of the area came at about 9 p.m. to ask me about a particular cell phone and asked if it belonged to my husband. I looked at the phone and told him that it was not my husband's phone and he left. Then after three days another set of policemen came, sent by the inspector general to come and console us. That is all I have had from the police.

CPJ: Do you think the police are doing enough to find your husband's killer?

Ohu: I don't think so.
CPJ: Did your husband hint to you about any risky story he was working on prior to his death? Any threats?

Ohu: No. Not at all.
CPJ: Do you know much about the circumstances surrounding his death?

Ohu: According to The Guardian, they said my husband was working on a corruption and certificate forgery story by some Nigerian custom officials. So I hope the newspaper will pick it up from there to find out how those people might have been involved in hiring my husband's assassins.

CPJ: Have you been in touch with the management or editors of The Guardian?

Ohu: Yes. They have been in touch. I must say they are trying their best. But I would have liked more stories about my husband to be published.

CPJ: How would you describe his journalism career?
Ohu: My husband loved his job so much and had lots of passion for journalism. That is why I decided to join journalism, and he really encouraged me in my mass communication studies. Currently, I am doing a degree in mass communications in Ogu State University. But then, I was focusing on venturing into advertising not journalism, but because of what happened to him, I have now decided to go into full journalism to complete what he had started.

CPJ: I admire your resolve and courage, but aren't you afraid you may encounter the same fate?

Ohu: No, not really. I am determined to find out who killed my husband and for what reason. The fact that he was killed by hired assassins was because he stood by the truth. This is my reason to go into journalism, to find our why he was killed and to continue reporting those things that his killers did not want reported.

Clifford Derrick is based in Johannesburg.