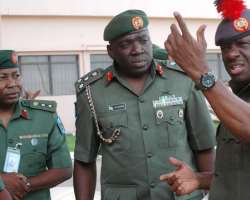 
The Army Council has approved the promotion of 102 senior army officers.

The statement listed Brig.-Gen. Emmanuel Atewe, Commander, Guards Brigade; and Brig.-Gen. Chris Olukolade, Director, Defence Information, as among the 27 officers who have been promoted to the rank of Major General.