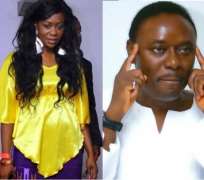 A lot of people have blasted Pastor Okotie of Household of God for his alleged dirty and tasteless utterances against the Catholic Church and Prophet Joshua that all worshipers in their churches would go to hell because they serve Satan.READ IT HERE

Well, one of those who have lampooned the funky man of God is Toni Payne, erstwhile 9ice's wife. In her tweets, he calls the former singer triple 'Oshisko' meaning, triple mad man and also said that a true and genuine man of God would not utter such gibberish against another church.

Toni, the poet also said “I don't blame him sha….I blame those attending his church…your pastor told you that God told him to divorce and you no go find another church…”

Read the tweets below

Many pastors and imams secretly come to me to consult Ifa – Ifayemi Elebuibon, traditional priest