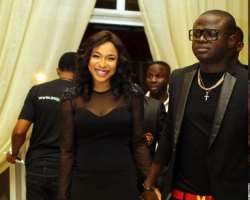 Tonto Dikeh mostly described by some people as an eccentric being, especially with her carefree attitude. Some have wondered if any man can successfully tame her or bring her under his control.

For those who have maintained that only a super rich dude can tame Tonto, they might have now been proven right.

At the recently held ELOY Awards, the controversial star actress revealed the man that is behind her recent joy and happiness. For those who wish to know, one Michael Awujola, also known as Malivelihood, is the boyfriend of Tonto Dikeh.

The dude is rich and is said to be behind most gold plated accessories Nigerian celebrities flaunt lately on social media. Now you know who is rocking the heart of Tonto Dikeh.

Well, for those who feel they have what it takes to displace Mike in the reactivity series (a term in displacement reaction in metals in Chemistry), the game has begun.