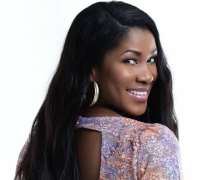 According to what we reliably gathered from two online reports, star actress, Stephanie Okereke-Linus has been dropped as the brand ambassador of Kanekalon Hair. The wife of Linus Idahosa had got the endorsement deal in 2011 and was promoting the company's products on various platforms she was involved in.

According to what we scooped from the reports, Stephanie was allegedly dropped when she stopped promoting Kanekalon and was no more adding value to the brand.

"It was gathered that the management of the company was not happy with the way the actress didn't use her influence to help their product in the market. As learnt, other brands of hair products in the market were doing better that Kanekalon, though they didn't have known faces to their products.

"We scooped that the company marketing the product felt that they were wasting money paying Stephanie as their brand ambassador," one of the reports stated.

She was however contacted via text for her reaction but she didn't reply.

Additional reports by Aproko247 and The Octopus News.