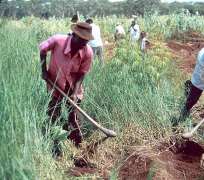 DAKAR, Sénégal, November 20, 2013/ -- “Nearly 240 million Africans are malnourished and although only one-third of those who face hunger are based in Africa, the percentage of people who suffer from hunger here is higher than in any other region of the world,” stated Mr. Charles Abugre Akelyira, Africa Regional Director of the UN Millennium campaign, based in Nairobi.

“We must invest in agriculture not just to feed the current generation but to prepare for the two billion more mouths we will need to feed by 2050. In particular, we have to invest in small-scale agriculture, as part of our mixed strategy. Two-thirds of our farm outputs come from small farmers,” he said.

Mr. Akelyira was the keynote speaker at the recent two-day convening entitled “A Decade of CAADP: Reflections on Key Outcomes of Agricultural Policy Reforms in Africa.” The convening, held at the Laico Regency Hotel in Nairobi, Kenya on November 12-13 was sponsored by TrustAfrica (http://www.trustafrica.org), in partnership with the Bill and Melinda Gates Foundation.

Its purpose was to raise awareness about the role of agriculture in development and to give voice to those most affected by agricultural development policies, particularly smallholder farmers.

Participants from six African countries—Ghana, Malawi, Kenya, Tanzania, Uganda and Nigeria—came together to reflect on the work they have done under TrustAfrica's Agricultural Reform project. The advocacy project, begun in 2010, seeks to raise awareness among smallholder farmers about the promises made under the Maputo Declaration Target, which, in part, states that African governments will dedicate 10% of their budgets to pro-poor agricultural policies.

The aim is to have farmers hold their governments accountable for the budgets they have been promised. So far TrustAfrica has assisted 21 organizations over the 3 years the program has been in operation. It has donated approximately $955,629 in grants on behalf of the Gates Foundation.

During the conference, panelists reflected on the performance of the CAADP (the Comprehensive Africa Agriculture Development Program) since its inception 10 years ago. There was an agreement that more education needs to be done to create greater awareness around the issues facing smallholder farmers on the part of CAADP. “We have their blessing, but not their drive,” one participant stated. “There should be sector-wide reviews involving all stakeholders,” stated another.

“This has been an important opportunity for stakeholders working with the smallholder farming sector to gather together their impressions, lessons learned and ideas around the issues related to the CADDP and improving the lives of smallholder farmers,” said TrustAfrica Acting Program Director, Dr. Tendai Murisa.

“However, when it comes to the issues that concern these stakeholders, there is still work to be done. We are excited about the fact that the AU has decided to declare 2014 the year of Agriculture and Food Security. However, we are concerned that African governments have not increased their allocations to agriculture. There is an urgent need to realign the policies and resources of governments so that they better reflect the already existing consensus that in Africa, agriculture has the potential to be the engine that can drive inclusive growth and development.”

Participants took time during the conference to share lessons learned and strategies for their continued advocacy work. Topics included the role of research and extension work, resource mobilization strategies, and trends and innovations surrounding policy work. In the evening, participants also took part in a Marketplace Exposition that allowed civil society organizations to share some of the results of their efforts.

Distributed by APO (African Press Organization) on behalf of TrustAfrica.

TrustAfrica (http://www.trustafrica.org) is a public foundation that seeks to secure conditions for democratic governance, equitable development and African philanthropy across the African continent. Led by Africans, TrustAfrica organizes meetings, catalyzes ideas, and provides grants and technical assistance to organizations working to advance these goals.