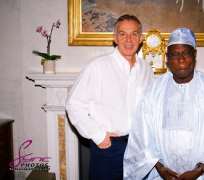 Former President Olusegun Obasanjo (OBJ) was in London some days ago where he addressed the G20. The PDP chieftain spoke on 'Financing in Africa' at the seminar and also had time to visit former British Prime Minister, Tony Blair at his residence to have a tea with him.

Obasanjo participated in the panel of discussion for the sixth of White and Case's Autumn Conference series, which he chaired. The panel extensively dissected 'The Impact of Natural Resources Discoveries' in Africa.

Also on the panel were Cherie Blair, Tsatsu Tsikata (former CEO of Ghana National Petroleum Corporation), Helmut Engelbrecht, Rebecca Campbell and Jason Kerr (who are both partners at White & Case).

The panel also reviewed the infrastructure development in the context of the tremendous growth seen in the mining sectors of many African nations.

After the seminar, OBJ headed for an impromptu meeting at the Headquarters of the OOF in Grosvenor gardens, London to discuss the foundation operations in the past few weeks as well as scheduling new programs and events in 2014.

Later in the day, Tony blair hosted him at his residence before heading back to Nigeria.