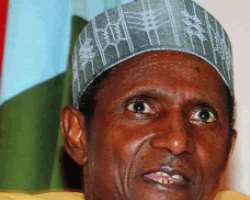 Back from the brink
• Yar'Adua ready to meet Jonathan, Mark, Bankole, Katsina-Alu

By DURO ADESEKO
Saturday, March 06, 2010
Yar'Adua
Barring any change in plan, President Umar Musa Yar'Adua may likely give Nigerians who have written him off a shock when he resurfaces soon to meet with the Acting President, Goodluck Jonathan, Senate President David Mark, Speaker of the House of Representatives, Hon. Dimeji Bankole and the Chief Justice of Nigeria, Justice Aloysius Katsina-Alu.

A highly reliable source close to the first family and the Presidency hinted to Saturday Sun that the scheduled meeting is aimed at reassuring the nation that Yar'Adua is not really incapacitated but just ill, as a normal human being.

The source, whose revelation that Yar'Adua would return to the country came to pass two days after, said that the president decided to meet the leaders of the various arms of government at the same time so that they would collectively see that he has recovered from the illness.

He said: 'The president will meet all of them at the same time. He will not see them individually. The purpose of meeting with all the key officers of the three arms of government is to convince them that he is not incapacitated.'

He said Yar'Adua may not return to work immediately, but that the meeting will douse the tension in the country. He however noted that the president may be back at his duty post in the next four weeks.

'Having a meeting with Jonathan, Mark, Bankole and Katsina-Alu does not mean the president will take over the running of government immediately. It will take him another four weeks to be fit to assume duty,' the source said.

The source told Saturday Sun that although Yar'Adua was in bad shape at a time during the his treatment in Saudi Arabia, he has recovered tremendously in the last couple of days. He said that if the president's condition was not better than it was in November and December 2010 there was no way his wife, Turai, would have allowed anybody to move him from Jeddah to Abuja.

The source admitted that Yar'Adua is actually weak and needs time to fully recuperate. He emphasized, however, that his condition currently is not too bad.

'The President is frail. He needs to take his time and relax before becoming active again. All these stories about the president dying are not true. People are just deceiving themselves. And many Nigerians will be shocked when they eventually see the president,' the source said.

The source added that Yar'Adua is okay with the acting president arrangement, despite the fact that he did not initiate it.

The source, however, revealed that some of the actions of Jonathan, since he became acting president, do not go down well with Yar'Adua. He specifically pointed out the redeployment of former Attorney General of the Federation and Minister of Justice, Mr. Michael Aondoakaa, as an example.

'Jonathan and Yar'Adua are in good terms. They are supposed to be one and the same. But some people close to Yar'Adua don't understand why Jonathan should be after him. Why did he get the National Assembly to amend Section 144 of the constitution? Why did Jonathan sack Aondoakaa, the Attorney General of the Federation?,' he queried.

The source said that the Yar'Adua camp suspects that there is desperation on the part of Jonathan to be president. He said that some people saw the health problem as an opportunity to shove off Yar'Adua.

'If this is not the case, why did Jonathan quickly allocate oil blocs? He knew that Yar'Adua would come back and quickly acted on the oil bloc matter. Are you not surprised that one week after he allocated oil blocs the president returned?'

The source said that Yar'Adua takes responsibility for everything that happened in the last three weeks. He said that the First Lady, Turai, should not be blamed.

'It is well now that people think Yar'Adua's wife is responsible for many wrong doings of Yar'Adua. By the time he comes out and speaks, people would hold him responsible for his actions.'

Yar'Adua was brought back to the country last week after spending three months in Saudi Arabia on medical treatment. Since his return, nobody in government has seen him. Jonathan made moves to see him on two occasions, but was refused.