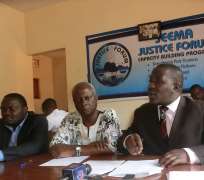 According to the electoral commission, the contested polls are due Nov 15 and 19, 2013 and would be conducted by respective executives of these bodies—among which health, lawyers and engineers.

“We urge the electoral commission to suspend the election until our concerns are ironed out. If not we shall challenge the exercise in court,” said Joseph Bossa, the vice president, UPC in a joint press statement at Jeema headquarters in Mengo.

“The legal framework upon which the exercise is organized is flawed; its sheer imaginations of the minister concerned,” Basalirwa said in reference to the new KCCA statutory instrument released by Presidency Minister Frank Tumweze where parties were ignored in consultation process.

The Jeema president accuses the minister of 'manipulations,' intended to make the ruling party dominate councilors in the city authority.

Vincent Mayanja, the DP Deputy Secretary General cited the proposed electoral colleges in the said law as a mockery of democracy.

“How can, for example, only 8 executives of the health workers' body be expected to fairly elect among themselves on behalf of the hundreds of health professionals?” he asked before adding; “this is disenfranchisement.”

Below is the full petition to the Electoral Commission, Chairman, Eng Dr. Badru Kinggundu

We refer to a consultative meeting held on 11th October 2013 at Hotel Africana that was, according to Commissioner Joseph Biribonwa, intended to solicit views from stakeholders in order to inform the modus operandi under which elections for the representatives of the prescribed Professional Bodies at the Kampala Capital City Authority could be managed.

We are however surprised by the events unfolding since the convening of the said stakeholders' meeting. Our views are premised on the fact that in spite our collective counsel to the effect that before the Electoral Commission goes ahead to manage the said electoral exercise, some key issues pertaining to the exercise, should first be addressed and communication over the same be made. In fact, Commissioner Biribonwa, promised the meeting that consultations with stakeholders were continuous and that issues raised during the meeting were to be addressed before the release of a final program.

However, it seems to us that the Electoral Commission has instead gone ahead to announce and/or advertise the program for the said electoral exercise in an apparent disregard of all the key issues raised in the stakeholders meeting.

We therefore seek the Commission's clarification on the above concerns.

Our attention has been drawn to certain provisions of the Kampala Capital City (Election of Representatives of Professional bodies) Regulations No.39 of 2012. Our concerns are as follows:-

2. The Kampala Capital City (Election of Representatives of Professional Bodies) Regulations, 2012 contravene Articles 1, 2, 29(1) (e), 38, 69, 71(f) and 72 of the Constitution and section 119A of the Local Government Act as it does not provide for the right of Political Parties to sponsor candidates for the elections of Councilors representing the Professional bodies under the multi-party political dispensation. We strongly believe that Kampala Capital City Authority is a political organ or institution and therefore political parties' participation must be recognized.

3. There might be members of prescribed bodies who are employed in government departments or institutions, and may wish to stand and they have not been given ample time to resign within 30 days as required by S.116(5) of the Local Governments Act. The process and date for the intended election must cater for such cases and must be considerate to the terms of service these individuals have with their employers.

4. It is also obvious that the Regulations providing for the electoral colleges of these professional bodies have the effect of disenfranchising members of the said professional bodies. This is a gross violation of the constitution in as far as the right to vote is concerned. How can a handful of executive committee members, who in some cases are less than 10, purport to choose a political representative for and on behalf of the body?

This therefore calls for;
i) Demarcate the electoral areas in accordance with section 109 of the Local Government Act, which has not been done to date.

ii) Carrying out a voters register and roll update exercise for Kampala Capital City to remove those who no longer qualify to be on the roll or register and to include those who have attained qualifications or have joined the said professional bodies for being put on the register or roll. The above exercise has not been carried out.

iii) Withdrawal of the said regulations and engage in extensive consultations with all stakeholders before the line minister issues new regulations.

We strongly urge the electoral Commission to stick to its independence and suspend the intended election until the above have been ironed out.

However, if the Electoral Commission insists on conducting the said elections, we would be left with no option but to challenge the entire exercise before the Courts of Law.

FOR GOD AND OUR COUNTRY.
Signed by:-