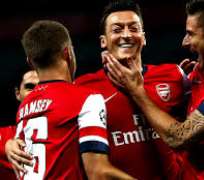 
For many observers, Arsenal needed to beat a major rival to prove its worthiness as a title contender in the English Premier League. The team responded with a thrilling performance and two superb individual goals from Santi Cazorla and Aaron Ramsey, beating Liverpool 2-0 and moving five points clear at the top of the table on Saturday.

Cazorla’s goal to open the scoring was a symbol of Arsenal’s determination and resolve to prove their critics wrong. Mikel Arteta released Bacary Sagna down the right in the 19th minute and the full back’s excellent cross was headed firmly onto the post by Cazorla. The Spanish midfielder didn’t give up, collecting the rebound and volleying into the upper left corner.

Arsenal sealed the victory in the 59th when Ramsey received a clipped pass from Mesut Ozil, dribbled forward and patiently waited for the ball to bounce up in front of him before unleashing a thunderous shot that dipped over the outstretched hand of Liverpool goalkeeper Simon Mignolet.

“It was an important win for the team, for the club,” Arsenal manager Arsene Wenger said. “I don’t think anyone will dispute we deserved to win today.”

The match was a big test for Arsenal because critics believed the team moved to the league summit against relatively easy opposition. Liverpool was in second place going into the match and now sits third, behind Chelsea on an inferior goal difference.

In their previous two home games, the Gunners faced strong opposition and lost both games _ to Borrussia Dortmund in the Champions League group stage and to Chelsea in the League Cup. After those defeats, some said Arsenal would wither against its main rivals like Liverpool.

“We needed to respond today,” Arsenal manager Arsene Wenger said. “It was important to convince people that you can win the big games and to do in a convincing fashion.”

Wenger was especially pleased with the clean sheet and how the team defended, shutting down the dangerous strike partnership of Luis Suarez and Daniel Sturridge.

“Our defensive performance was outstanding,” he said.

Arsenal’s league form has been stellar since losing the opening match to Aston Villa, with the London club winning eight and drawing one.

Up until Cazorla’s goal, the teams were engaged in a midfield battle and neither gained a foothold in front of 60,000 spectators at Emirates Stadium. Liverpool pressed high up the pitch, but Arsenal managed to stifle the visitors’ rhythm and was content to build from the back.

Cazorla’s goal invigorated Arsenal and the home team began to surge forward. The midfielder nearly scored a second but a flying save from Mignolet denied him.

Sturridge had the only meaningful chance of the first half for the visitors, but his weak, 20-yard shot was easily caught by Wojciech Szczesny. But Liverpool started the second half brightly, with Suarez creating danger on several occasions.

Liverpool had a chance for a late consolation goal, but Suarez chose to shoot across the face of goal instead of setting up strike partner Sturridge at the far post and the Uruguayan’s effort missed.

“It was a game they (Arsenal) deserved to win,” Liverpool manager Brendan Rodgers said. “They had the greater control. We’re disappointed with the two goals we conceded.”

Rodgers’ only grievance was a chance in the first half. Suarez took a quick free kick after being fouled by Sagna, which released Sturridge, who crossed to Jordan Henderson for an easy tap-in. But the referee disallowed the goal, pulled play back and cautioned Sagna. The Liverpool manager spoke after the match with the referee, who told him he had to stop play to book Sagna.

“I don’t agree with it, but overall I thought the referee did a good job,” Rodgers said.

Arsenal’s next two fixtures are tough ones, away matches against Dortmund and Manchester United. Midfielder Jack Wilshere missed Saturday’s match with an inflamed ankle and it was not clear if he would be ready for Wednesday’s clash against Dortmund.

Liverpool was missing right back Glen Johnson. He had to pull out of the match about a half hour before the team was to be named and was taken to a hospital with an unspecified illness, Rodgers said.

Chelsea lets its defense drop — JosÃ© Mourinho has come back to Chelsea to make the club a contender in the league again. Already, his team has given some intimidating displays — as it should given the wealth of talent in the squad. Yet Chelsea cannot find consistency away from home. It has won once in five road league games.

On Saturday, Chelsea comfortably dominated the first half at Newcastle, failed to scored, gradually surrendered control and lost, 2-0.

Maybe Mourinho had one eye on the Champions League match with Schalke on Wednesday. He rested his in-form attacking player, AndrÃ© SchÃ¼rrle, and a central defender, Gary Cahill. David Luiz, who replaced Cahill, showed once again that he cannot always be relied on to win key challenges. John Terry was exposed when Newcastle was able to attack with pace — which is one of the things the Mourinho system at Chelsea is designed to prevent.

Mourinho was not happy.
“I made 11 mistakes, 11 mistakes. I should have picked another 11 and not this one,” he told the BBC. “When my team plays so badly, it’s the feeling I have.”

Then he added that the problem existed when he arrived, a fact, he implied, that he has only just discovered.

“Of course I am worried, and I read in previous years it happened the same,” he said.

Chelsea might have won if it had gone for the jugular more aggressively. Yet Mourinho’s focus is on making his team tougher to beat. The problem is that, the squad he has inherited, is not set up for the type of smothering, physical defensive tactics he likes to employ. On Saturday, Chelsea got the worst of both world. It was sacrificed verve in attack without gaining security in defense.

The good news for Mourinho is that if he wants to select another 11 for the next time, Chelsea’s resources mean he can do it.