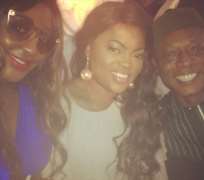 It's evident that the Nollywood actress, Funke Akindele whose marriage cracked about three months now, has put the marriage issue behind her as she now parties at will.

Since Funke Akindele's marriage to politician/businessman Alhaji Kehinde Oloyede Almaroof ended and even though their separation caused her a lot of pain, Funke has gotten her groove back.

Having survived the pain and hurt, Funke Akindele shared a photo of herself looking all prettied up and sexy on Instagram to celebrate her strength with the caption “Thank you Lord, dead bones shall rise again, God is able”

She also shared a photo of herself partying with colleagues, Ini Edo and Osuofia star, Nkem Owoh.The actress shared the picture on her Instagram account with the caption, “#partying #fun parrying like a bigs geh with my darling @Iniedo and #Osuofia.”