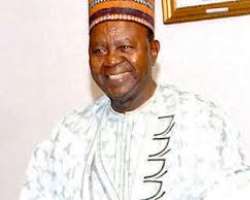 His death, was confirmed by the state governor, Jonah Jang while meeting with the new Speaker of Plateau State House of Assembly, Hon. Titus Alams.

He reportedly died in a United States hospital on Wednesday.

He was aged 80.
The former governor of Plateau state and pioneer national chairman of the Peoples Democratic Party had been battling an undisclosed ailment for some months before he was flown to U.S for treatment.

Lar, who was born in April 1933, was a politician who  held various offices at the national level for over 50 years. He was a member of the first national parliament when Nigeria gained independence in 1960. He was elected governor of Plateau State on the Nigerian People's Party (NPP) platform during the Nigerian Second Republic, holding office from October 1979 until the military coup of December 31, 1983 that brought Gen. Muhammadu Buhari to power.