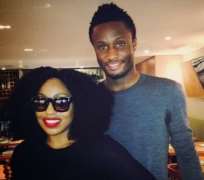 Rita Dominic is reportedly now in London and as well also used the occasion to hook up with Nigerian international, John Obi Mikel, who plays for a London club, Chelsea FC, of England.

The two posed for a photograph, which has caused some tongues to wag that the two stars look cute together and that they could be a very good match, judging by the piece of photograph.

Rita Dominic is yet unmarried just like the Chelsea midfielder. The star actress recently claimed in an interview that the media destroyed her past relationships and would because of that not flaunt her 'lover' before the media at the moment.

If I Listen To What People Say; I Will End Up Getting Depressed-Top Actress, Funke Akindele