Beverly Osu And Angelo Get Intimate At Her Party Last Night 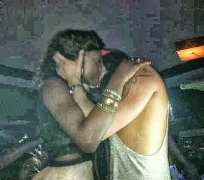 They proved that they are so much still in love as they were seen hugging and kissing each other in the presence of everyone at the party.