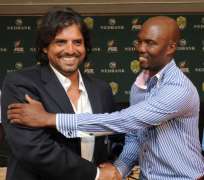 Ondo State is set to offer a big economic transfer bundle to Rodolfo Zapata to rebuild Sunshine Stars FC, if the Argentinean makes the move back to Nigeria this season.

Zapata has admitted that he has a verbal agreement with President Mike Idoko. "It is true that Sunshine have shown a lot of interest that I become their coach and I have had conversations with them.'' he said.