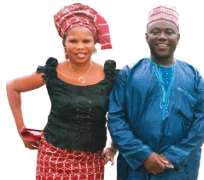 I can't withdraw money without my wife's permission — Abubakar Yakubu

Abubakar Yakubu is an actor and he has been married to Precious for eight years. In this interview, they talk about their union

How did you meet?
Yakubu: I met her before she left secondary school. She was in her final year then. She was a very innocent and naive girl who took me like a friend and teacher she could talk and relate to.
At what point did you decide you would marry him?