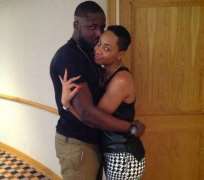 Elikem and his girlfriend-in-the-making Pokello have already gotten down to some serious romance business, days after the former left the Big Brother Africa reality television show, which wrapped up on Sunday evening.

Images of both lovebirds, looking all intimate have surfaced online. The images are suggestive of how tight they've become post BBA, and just how serious they are taking this whole love-brewed-on-reality-television.

Both are set to go on a sponsored holiday trip worth some USD 10, 000, his reward for winning the Most Romantic Housemate of The Chase, voted for by the show's viewers.

- A five-night, all expenses paid stay in a luxury room at the Sarova White Sands Hotel in Mombasa, Kenya.