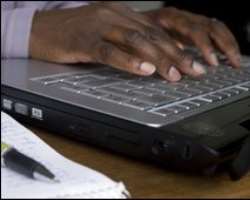 http://www.nigerianbestforum.com/blog/wp-content/uploads/2010/03/46735484_007678911-1.jpg Egypt has been strongly criticised by Human Rights Watch for trying a blogger, Ahmed Mustafa, before a military court.

The 20-year-old is accused of publishing false information in a blog a year ago, alleging a case of nepotism at Egypt's premier military academy.

Egypt's emergency law, in place since 1981, allows indefinite detention and trials of civilians in military courts.

Egyptian officials have denied that the power is much used.

Mr Mustafa, an engineering student, is charged with releasing information considered secret to the armed forces, and of spreading false information insulting officials responsible for admissions to the military academy.

The only evidence presented at his trial this week is the post on his blog.

'Mockery'
There has been no investigation into his claim of corruption, namely that a teacher's son was pushed out of the academy, to make way for the son of a more influential individual who could make financial contributions, Christian Fraser, the BBC correspondent in Cairo says.

Under two international human rights accords, both ratified by Egypt, the government is required to protect freedom of expression.

Kareem Amer was sentenced to four years in prison in 2006, for writing about sectarian tensions in Alexandria and criticising President Mubarak.

Another blogger, Hany Nazeer, was detained in October 2008 under the country's emergency law that was designed to fight terrorism for expressing forthright views on Christianity and Islam.

Last year after a visit to Egypt, the United Nation's Special Rapporteur on human rights reiterated that the trial of civilian suspects in military courts raised concerns about the independent administration of justice.

“No civilian should be tried before a military court, and no government that claims to respect human rights should be prosecuting someone solely for writing about corruption,” he added.