…As ARS National Championship Kicks Off In Lagos
By Uche Peter 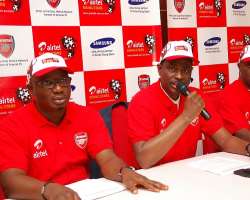 Lagos, Nigeria; August 22, 2013: The Lagos male and female teams to the National Championship of the on-going Airtel Rising Stars national U-17 Tournament have been handed tough draws in the opening group matches to be played inside the main bowl of the Agege Township.

The teams will face their counterparts from the Federal Capital Territory, Abuja and Kaduna in the male and female categories respectively after being drawn against them at the draws for the championship held in Lagos on Thursday by officials of the Lagos State Chapter of the Nigeria Football Coaches Association led by its Chapter Chairman, Prince Isaac A. Adeagbo.

If the Lagos teams scaled the hurdles posed by these teams, they would face stern opposition from Ibadan in the male category while the females will have their hands full against tournament defending champion, Port Harcourt.

In the other matches to be decided also tomorrow, Kaduna male team will be up against season one runner-up, Enugu while Port Harcourt will have to wait for the winner between these two teams.

In the female category, Enugu will square up against their counterparts from Ibadan while FCT will be in the waiting to take on the winner of the match.

Meanwhile, tournament organizer, Airtel Networks Limited, has said expressed satisfaction with the organization of the tournament in light of the remarkable achievement it has recorded since it was introduced two years ago.

The company's Chief Executive Officer and Managing Director, Segun Ogunsanya stated this Thursday at the draws for the national championship held in Lagos.

“It is a known fact that Football in Nigeria elicits passion, creates fun and encourages unity among our people. These are some of the key objectives we seek to achieve with the ARS Tournament, to reinforce national unity and cohesion among Nigerians. The tournament is primarily aimed at resuscitating and sustaining Nigeria's rich history of achievements in age-group football and we are proud to say that this is already yielding fruits,” he said.

He also noted that the ARS platform is special purpose vehicle for identifying, nurturing and developing talented footballers (both male and female) in Nigeria in line with the company's vision of becoming the most loved brand by helping people achieve their dreams.

Mr. Ogunsanya also announced a goal-for-education incentive during the forthcoming National Championship. The company is offering $100 for every goal scored during match regulation time at the championship. At the end of the Championship, a participating team will receive the aggregated monetary value for the number of goals it scored during regular match time with the liberty to choose which public primary school in home state or zone gets the donation.

Meanwhile, 12 male and female teams comprising 192 players drawn from six zones across the nation will be featuring in the three-day Championship.

The teams qualified for the three-day championship after featuring in the zonal championship phase where they had to see off strong competition for the national finals tickets from other equally good teams in their zones. They include Kaduna, Abuja, Enugu, Port Harcourt, Ibadan and Lagos, all of which will be featuring both in the male and female categories.

Tournament partners, Youth Sports Federation of Nigeria (YSFON) and the Nigeria Football Coaches Association (NFCA) are to lead an independent team of assessors including grassroots coaches to oversee technical concerns during the championship.