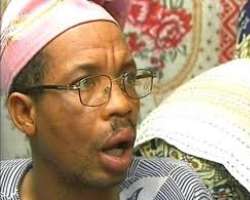 Popular comic act in Nigeria, Afeez Oyetoro well known as Saka, is 50 today, Tuesday, August 20, 2013. The multi-talented actor has come a long way in the movie industry in Nigeria.

Until recently, he was a relatively unknown role-interpreter. He started to gain the consciousness of movie buffs few years ago. He is an actor that can tagged as stereotyped.

He became a national commodity when he 'ported' from Etisalat to MTN to promote the network's portability system recently introduced by the NCC, a body regulating telecoms in the country.

He is a lecturer at the Adeniran Ogunsanya College of Education, Ijaniki, Lagos. From Nollywoodgists.com, we say happy golden birthday to the 'port master'.