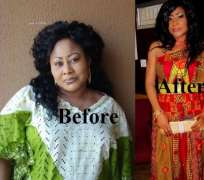 Going by what we discovered, the actress no longer look as healthy as she appeared in the past.

Months back, our attention was drawn to her new appearance, after she starred in a recent movie that revealed her unhealthy looks.

It was then assumed that the series of make-ups she underwent on movie set might have introduced the changes.

Her appearance at the premiere of Briefcase at Odeon Cinema (pictured below) revealed that the darling Nollywood actress has lost half of what made her the delight of many.