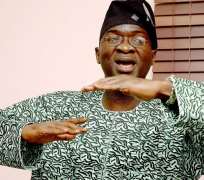 On Wednesday 24 July 2013, Nigeria's Lagos regional regime, headed by Raji Fashola, deported 72 Igbo people from Lagos to Onicha, the Igbo Oshimili/Niger delta city, 230 miles away. This is the second such deportation that Fashola has embarked upon within a year.

On 18 September 2012, Fashola deported “hundreds” of Igbo people from Lagos to Onicha. The deportees had all been earlier detained in “warehouses” in Lagos and some in the neighbouring Ogun region for months before their deportation to Igboland. Many of the deportees are children and older people and some have disabilities.

Raji Fashola is a lawyer, a member of the Nigerian bar and he is in fact categorised as “senior advocate”. The world will note that these deportations contravene articles 2 (b) and (c) of the UN “Convention on the Prevention and Punishment of the Crime of Genocide” to which Nigeria is a signatory. The deportations do indeed fit into the overarching architecture of phase-IV of the Igbo genocide, initiated principally by Obafemi Awolowo, another lawyer, another “senior advocate” of the Nigerian bar, who was then deputy to the genocide prosecuting junta (prime minister) as well as head of the finance ministry and “chief theorist” of the campaign.

This phase's strategic objective is to dismantle/degrade the pre-genocide Igbo economy, Africa's most resourceful and dynamic, in perpetuity. The Awolowoist/Awolowoid expectation is that millions of Igbo would be “forced” out of a “stagnant” homeland-economy with an ever-deteriorating infrastructure to be domiciled elsewhere in the world, with Nigeria envisaged as “main destination” where they would primarily labour in the local industry and services – quite clearly, a form of deportation and this one is straight out of a nazification textbook! What Fashola has tried his hands on twice, within the past 10 months, is the beginning of the reverse trend in deportation. And this can only become more virulently pursued subsequently – again, out of a nazification textbook!

None of the usually visible and shrilling human rights practitioners (individuals or institutions) in and around Lagos has condemned this outrage. If the governor of the state of New York, the US “equivalent” to Raji Fashola, were, for instance, to have deported 72 African Americans to, say, Georgia or Louisiana last week's Wednesday, the Lagos practitioners would have since been working their phones and pounding their keyboards on calls to the BBC and other broadcasters and website outlets denouncing (rightly) such an act for the record! The hapless New Yorker would probably have lost their job by now, due to the predictable outcry against such repugnant behaviour from both domestic and international audiences. This outrage is another reminder which often affronts the sensibilities of the African democrat in the African World, outside Africa, that continental African heads of regime currently murder and/or inflict greater levels of damage to the African public than any other agency in the world and more often than not walk away free.

It is instructive to note that as the nondescript but ubiquitous Boko Haram cells murder Igbo people (and some others) in their north region homes, businesses, places of worship and recreation and force survivors and the maimed and the bereaved racing back to Igboland with the remains of loved ones, Raji Fashola-operatives, traceable and in uniform, abduct the Igbo from the streets and highways of Lagos, dump them in secured “warehouses” for disorientation for months and then “upload” them on trailers for the journey east to be “offloaded” at Onicha at dawn – usually between 2 and 3. The latter is no doubt a variation on the ultimate goal of the former as both play out in sync to Nigeria's current thinking on waging this protracted genocide: intensify the murder of the Igbo in the north and begin to challenge Igbo businesses elsewhere, especially in the Lagos district, despite or rather because of the well-known fact that Igbo capital and industriousness have played a key role in building up Lagos for about a century now. These dual vectors of genocide do clearly point the Igbo to one direction only: the east, the Igbo homeland.

It should now be evident to all that Igbo deportation is at the crux of Nigeria's sustenance of the Igbo genocide, the engine that fires it on. The deportation at stake here is of course the Awolowo-original, not the Raji Fashola-modulation even though the latter has brought this savagery to a head. The Igbo have no greater opportunity since January 1970 than today, now, to begin to deal with and overcome this evil permanently. To confront this deportation with dispatch is to begin the termination of this longest genocide of the contemporary epoch. No one else will accomplish this feat for them.

For the Igbo, the long march to re-take Igboland, re-claim Igboland, their homeland, for themselves, and consequently end the deportation of 43 years and phase-IV of the genocide begins now. Aimé Césaire would deftly put it this way: “quest to reconquer something, our name (sic), our country …

ourselves”. And Lagos, pivotally, where Igbo investments and assets are worth billions of US dollars, is where this march begins. Here lies the key to Igbo freedom. Igbo should now embark to disinvest in Lagos and transfer their gargantuan assets to Igboland – move your companies and stocks and shares out of Lagos to Igboland. Business cannot strive in a fascist stockade. The contrast of the democratic redoubts of Igboland couldn't be more welcoming.

Igbo entrepreneurs are therefore thrust with the challenge to turn Igboland into the workshop that serves its people and competes actively with the rest of the world. The world will surely respond accordingly by establishing crisscrossing routes of communication to Igboland to enhance cooperation and exchange. The investment and transformational opportunities emplaced within the population of 50 million throughout the 200-mile north-south stretch of highlands and escarpments and forestlands and grasslands and valleys and waterfalls and lakes and assorted reserves of mineralogical and agricultural resources from the Nsukka plateau (north) to Azumini, Igwe Nga/Opobo, Igwe Ocha/Port Harcourt, Umu Ubani/Bonny, Umuebelengwu and Ahoada of the Igbo Atlantic (south) and the 100 mile-panhandle from Ugwuta, Onicha and Anioma west to the Abakaleke/Ehugbo/Bende/Arochukwu east are breathtakingly immense for the imaginative and industrious investor.

To complement Igbo disinvestment of Lagos over the deportation, Igbo must also begin to boycott all goods and services made in and for Lagos. The Lagos brand is henceforth toxic: “Don't buy 'Made in Lagos'”. The frequently commuting Igbo should cancel all ticket reservations on flights in and out of Lagos and bookings inLagos hotels. They should use other airports en route to Igboland such as Enuugwu, Owere, Asaba, Igwe Ocha and those in Calabar and Uyo. New airports should be built to cope with the fast changing situation. A Lagos boycott will only soon force airlines to route directly to hitherto un-used facilities (with the necessary upgrades of course!) such as Enuugwu and Owere, for instance, as ultimately, as everyone knows, successful business orients to the client's preferences. There is no reason why the overwhelming majority of Igbo travellers should not fly straight to their Igboland destinations in a few months as the boycott of Lagosintensifies.

No more Lagos business conferences: don't plan one there; don't attend one there – just skip it as “unimportant”! Finally, the Igbo importers and exporters who command a dominant space in the Lagos district ports' activities should move their businesses elsewhere: Igwe Ocha, Calabar, Warri, Sapele, Burutu and, soon, Igbo entrepreneurs and engineers will add to these capacities new outlays in Azumini, Onicha and elsewhere and the bridging up of the Aba-Igwe Ocha conurbation to further diversify enterprise and opportunities.

The return of the Igbo has indeed begun.