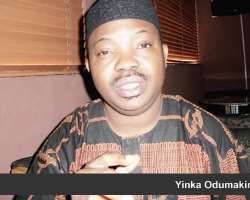 
General Mohammadu Buhari's Spokesman and Chieftain of the Save Nigeria Group, Mr. Yinka Odumakin has accused the Governors of the Action Congress of Nigeria, ACN, of awarding one Kilometer of Road construction for N1 Billion.

Boasting about his knowledge of Yoruba political leaders, Odumakin said, 'I can tell you authoritatively that the most dangerous and terrible tendency in Yoruba politics is the house of deceit that Tinubu represents.'

Odumakin, a spokesman for General Mohammadu Buhari, on his facebook wall recalled how he dragged former Governor Alao Akala to the Economic and Financila Crimes Commission, EFCC, for awarding One Kilometer of road for
N50 Million and said most Yoruba leaders are 'greedy.'

'I can tell you authoritatively that the most dangerous and terrible tendency in Yoruba politics is the house of deceit that Tinubu represents.

'Only those who have sold their souls will ignore this fact … There has never been any such greedy bunch in our nation- not under “Demo” or even PDP.

'I took Akala before EFCC in 2010 for awarding roads at N50m per km in all the LGs in Oyo state. Today your Asiwaju is collecting N1b per km across South West.

'When Tinubu turned “60″ ACN states contributed N1b for a bash, nobody tried that in Yorubaland before.

'Chief Adebanjo was chairman of AD in 1999 and not one relation of his got a ticket unlike your Tinubu whose wife is a senator,son in law a Rep, Sister in law a House member in Lagos and daughter now Iyaloja via imposition .

'Your grouse with the old men may be for reasons you have not stated but you know they are far more honorable than a million Bola Tinubu.'