The Public Has Negative Perception Of Artistes - Binta 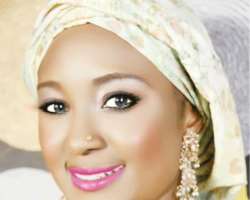 Sokoto state-born BintaYahaya is an actress and a journalist. She is the presenter of 'Aladun Arewa,' a programme on African Magic Hausa. She is one of the fast rising stars in Kannywood film industry in Nigeria. She speaks to SOLOMON NDA-ISAIAH about her life as an actress

What is new about you?

Journalism has always been a passion for me but movie was my initial passion. I see the journalism part of me as new and unique because a lot of people do not know that part of me, they only see the actress side of me. I intend making a career out of journalism by God's grace.

What have you been up to in recent time?

I have been doing a lot of project but most of them are still in their early stages. I have a project in Niger Republic, which I will not want to say much about now. I featured in about two movies last year and I also participated in a very interesting series.

So which do you prefer; an actress in Nollywood or Kannywood?

I actually belong to both sides of the industry. As an artist it would not be fair to limit myself to only one aspect ofmovie making industry in Nigeria. I think that a real artiste should be versatile and able to fit into anyrole assigned to him or her.

What is your opinion of the Nigerian movie industry?

Well it is a lot different from what it used to be in the past. It is an industry that has a future, but it is left to the artistes to build the industry together. Most of our Nigerian actors and actresses are leaving to other places, like foreign countries but there is more we can do to make things better for us that are here in the country.

The president has been very close to the movie industry in recent times, have you in any way gained from the money the president gave?

Actually I am yet to see any money, I am aware of the money which the president gave out but I am not aware of the disbursement.

Who is your role model in the industry?

I have a lot of role models, one of which is Genevieve. I like the way she carries herself and express herself in movies. I also like Ali Nuhu and the way he dedicates himself to what he is doing both for the Kannywood and the Nollywood. These are the two people I look up to.

What has been your greatest challenge since you started acting?

Well for most of us, the challenge is being respected and understood. The way people view the artiste is mostly in the negative. The public see us in the negative light but some of these perceptions are wrong.

Not at all. I hear of such things from others but personally I have not experienced such.

Sometimes, I like to travel but most times I watch movies because it helps me to improve on my acting career.

I love Malta; I love Greece and the European continent, which is one place I always like to visit.

I love beans a lot and I also like our local foods, they are natural and nutritious. I prefer them to packaged foods you see around.

What advice do you have for people who want to be like you?

My advice is that in whatever you choose to do, you should love it enough to do it even when you are not paid. There is a difference between a hobby and career. People should try to do things they love. One has to be much focused as well because in life there are lots of distractions, and then, let God lead the way in all that you do.
[Leadership]