HER IMPERIAL MAJESTY, PATIENCE JONATHAN AND THE REST OF US 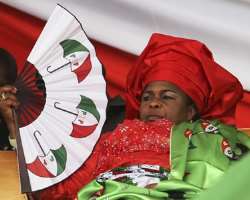 Prologue: This article was first published on Sahara Reporters on May 6, 2012. I was one of the commuters trapped in the agonizing traffic jam caused by the “Thank You” visit of the President’s wife to the commercial city of Lagos last year. I decided to re-publish in support of Punch Editorial of July 1, 2013; Patience Jonathan’s Excesses Must Be Curbed. It is apt to note that the thoughts I shared nearly 15 months ago, are similar to that opined by the respected Newspaper.

Perhaps we would progress as a nation, if we stopped this act of braggadocio, sit down and reflect soberly on our existence, and find solutions to our challenges. What joy do people in high place derive when moving in intimidating convoy full of flashy cars, wearing clothes and jewelries costly enough to assist pregnant women, the aged, as well as sponsor hundreds of kids to school? Presently, a number of unions in different sectors have embarked (or gave warnings) on strike; three States are under Emergency Rule; education, infrastructure, security, healthcare, power, industry, are all at a status majority of the electorate regularly invoke curse on their leaders. Regardless of this, some highly placed individuals are still comfortable showing off the same wealth meant for developmental purposes.

The moment the predicted revolution commences, those it would consume already know themselves.

"If you want to know what God thinks about money (and power), just look at the people He gave it to." Dorothy Parker - Writer/Poet

It was one of those days you wished you were not a Nigerian. But if you were, you certainly would not fancy having Lagos as a place of residence. Lest those in the patriotic ilk demand my head on a platter, I suggest them primo interview motorists/commuters caught in the gridlock. It was a flurry scene; horns hooting ceaselessly as anger grew by the minute. The sun cares less, clutching its pride of place; its light was appreciated but not the heat-awfully unbearable. Street traders had a stupendous day, getting good bargains and making instantaneous sales, the type only dreams are made of.

The young-some underage-hustlers savoured the while, at different times playing with one another; chatting and laughing aloud; luck had smiled on them. For a bit, I forgot I was supposed to be exasperated; taking in lieu a deserved break gazing at the boys. It was a free live entertainment albeit in the harshest of conditions. I was not only the member of audience, as they attracted the attention of many others. Their sight revived the thought of the unending misfortunes of our impoverished youths. In perpetuum, they delve the gains of the much publicized Transformation Agenda. I sympathize with them; graduates are yet employed, much less school dropouts/illiterates.

Save for occasional natural occurrences like rain and ocean surge, which was recorded many years ago, it was the first time I witnessed a sea of people trapped in a traffic jam later confirmed lasted about nine hours (8:30am-5:30pm). One wonders the plight of those who had an emergency situation, appointment or a deadline. A caller on a radio programme narrated how he and colleagues were robbed that night by men who posed as police officers. We should not tag only the days we see or hear of road mishaps, violent disturbances, fire disasters, terror attacks as "black days", some other days are worthy of such label. It is pathetic that the good people of Lagos who queued patiently, orderly, ignoring the scorching sun to cast their ballots for Mr. President were at the receiving end of the snarl precipitated by his wife, Patience Jonathan. I am sure the reader would have noticed that I did not use the "First Lady" appendage. It was deliberate. If I did, the anger I am may set my immediate environment ablaze; a situation one certainly forbids especially in a country where the fire service is near torpid.

That elected/appointed government officials every now and then deny us right-of-way is more than enough trauma to deal with. Now that their spouses have entered a "We block more roads than our Husband" tournament, the rest of our can as well begin to compose suicide notes. Nowadays, one thing I have observed is that more women are excited when their partners signify interest in elective posts and the reason is not implausible. The influence wives of Their Excellencies wield these days is in no small measure intimidating. You would be swimming in a pool of stupidity, if you took a bet with your life-savings that these emperors are down-to-earth; it will only take a few hours before you say hello to bankruptcy. African women in corridors of power are widely known for their habitual arrogance and luxury tastes. A shipshape example is Leila Ben Ali, wife of ousted Tunisian president. Dubbed 'the Imelda Marcos of the Arab world', the former hairdresser held sway while her husband reigned, importing expensive foods and ice-cream. Obsessed with mansions, fast cars, shopping sprees in Paris and Dubai, she was reported to have fled with gold bullion worth $60m! Evidently, what a man can do...

With all sincerity, I am yet to comprehend what Mrs. Jonathan's sojourn to Lagos was about. We are made to understand it was a "Thank you visit" and launch of her peace advocacy initiative. As not so good as that sounds, let me attempt to put the theme into perspective. In the 2011 presidential elections, her husband got over a million votes in the most populous state of the federation, but the event in query was held at a venue of two thousand (thereabout) capacity. And in actual sense, about a quarter of the attendees were part of her entourage from Abuja and other states. On that account, it is safe to say she said ‘Thank you’ to around one thousand six hundred people representing 0.1 percent of those whose votes propelled her husband into office.

Her handlers and co-travelers should know better. What they organized was nothing but a glorified charade.

Before they rejoice too long thinking they took us on a jolly ride, may I inform them that gathering a rented crowd in a refined event centre with the entire media buzz is an affront on Lagosians. I even saw her distribute gifts to paltry handpicked women. Soon they will announce that the items were donated by 'Committee of Friends' or an international donor agency.

I laughed in Awori (my native language) when a friend apprised he heard that our overall madam's visits is scheduled to take place nationwide. Nonsense! At a time we ought to devote time, energy and resources so as to ensure vision 2020-20 is met, some folks are going about having jamboree on state funds! Although Mrs. Jonathan's intention is commendable, I think her peace campaign is at the moment exigently needed in the north part of the country where blood-letting has continued unabated. I am sure that by now, the people of that divide must be envious of the south-west region as the Lagos stop-by was sequel to the one held at Oyo state two months ago. That too was anything but decent.

During her stay there, overzealous security operatives were at their usual worst. At the entrance of the venue, they once again displayed an obvious lack of crowd control mastery, mistreating high-ranking state officials, invited dignitaries and accredited journalists. What madness! Is this all in the name of protecting the wife of the Commander-in-Chief? My mother too deserves such security as she campaigned for GEJ in our village and he won resoundingly there. It is completely repugnant that scholars and professionals are brazenly assaulted, embarrassed by a set of persons who may not be able to complete a simple sentence and till date no one has taken responsibility or apologized. Like one of my favorites trend on twitter puts it that is “#HowToKnowGodisPunishingYou”.

But we should not stop talking about it. All citizens must be treated fairly. Even in our different religions, the teaching is that everyone is equal in the sight of the Great One above. Anarchy looms the moment a class of people in the society flagrantly subjugate others even in a sovereign nation like ours. We have to realize that power fades and as such we should do unto others what is right. Accountability in governance must be prioritized so that the outside world would seize to pore over us frivolously. Wives of public officials ought to know/be reminded that their major responsibility is taking care of the home front while offering sound advice and support where necessary.

But if they are keen on enjoying the paraphernalia of office attached to their respective husbands, they should endeavour to legalize it by sending a bill to the National Assembly for consideration and then push that it becomes a law. Pending when that happens, they should kindly spare us the executive lawlessness please!