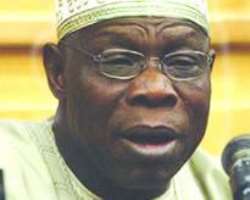 Fresh facts have emerged on what transpired at a recent secret meeting between former President Olusegun Obasanjo and Acting President Goodluck Jonathan.

Sunday Sun learnt that Obasanjo told Jonathan that he may have to pay a price by not contesting the 2011 presidential election if the ongoing effort to make him substantive president sails through.

A source at the meeting said the parley was principally convened to chart the way forward politically for the country.

Although the advice appears to be in the interest of Jonathan and the stability of the country, it was gathered that it was equally a ploy by Obasanjo to push through another agenda of imposing a candidate on the nation like he did in 2007.

Already, the plot has rankled some politicians in the North who fear that a fresh attempt by the former leader to impose his candidate on the nation in the 2011 presidential contest might be in the works.

The North and, indeed, other parts of the country are said to be blaming Obasanjo as the architect of the present political logjam in the country, because of the imposition of Yar'Adua on the nation in 2007.

The present fear is hinged on alleged plan by the former president to line up an array of his candidates as likely Vice President to Jonathan in an arrangement that will also allow the same candidate succeed Jonathan in 2011.

Sunday Sun gathered that the acting president is under intense pressure from the former president to consider one of his candidates.

However, the move, which has leaked to northern leaders, is being resisted by the oligarchy in the region, which has also been advising Jonathan to be his own man and resist pressure from the former president.

According to some of them working quietly to checkmate Obasanjo's moves, any attempt to allow him impose a northern vice president who will succeed Jonathan in 2011 will be tantamount to allowing him get his aborted third term agenda through the back door for the second time.

Some of the candidates Obasanjo is already pushing forward from the North East, according to sources, are his former Minister of Agriculture, Adamu Bello, the present Secretary to Government of the Federation (SGF), Alhaji Yayale Ahmed, who also served under Obasanjo, the Gombe State Governor, Danjuma Goje or his Adamawa State counterpart, Murtala Nyako.

The Jigawa State Governor, Sule Lamido, is said to be reserved as a joker from the North West, if the position is eventually zoned there.

Some groups are also backing former National Security Adviser to Obasanjo, Gen. Aliyu Gusau. Gusau, a presidential aspirant in 2007, is from the North West.

The case for Nyako, it was learnt, was that since he is old, he would have to leave the stage in 2011, along with Jonathan, paving the way for the emergence of another candidate.

But the dummy may not sell since Nyako is already campaigning for a second term in Adamawa.

Obasanjo was also said to have told Jonathan that he should not expect to be vice president again in 2011, after serving as the Commander-in -Chief for close to 15 months.

In the same vein, it was learnt that former Minister of the Federal Capital Territory, Mallam Nasir el-Rufai, and former boss of the Economic and Financial Crimes Commission (EFCC), Nuhu Ribadu, are also mounting pressure to be allowed to return home.

The two, who are also confidants of Obasanjo, it was learnt, are canvassing the position that younger elements in their mould from the North should be considered for the plum job.

However, some elements in the North stoutly against allowing the former President railroad the region into picking a candidate are already plotting to stall whatever move he makes in that direction.

They are said to be adopting 'a two-pronged approach of stalling Obasanjo's plans and at the same time coming up with a viable alternative to whatever plan that the PDP Board of Trustees chairman might put forward.'

The source, however, said: 'We might be looking at the possibility of a man that has no ambition to contest the 2011 election because we feel that the election should be credible for the stability of the country. The person too must understand the workings of government and be able to speak up for the North in the present set up.

'We need to shoot down the idea of using a politician if we want a credible election in 2011. Sincerely, we can do well without ambitious politicians supervising elections here. They don't do sincere jobs,' the source said.

It was further revealed that the names of a former minister, Gen. Ali Magoro, as well as that of former defence minister, Gen. Theophilus Danjuma, were penciled down as possible deputy in the event of Jonathan becoming substantive President.

'The two are people that are not interested in any election and they knows their onion. We know they are honest and love this country, and you can be sure they will do a good job. We will eventually settle for one of them after consultations,' our source added.

Meanwhile, Obasanjo's Abeokuta Hilltop home has become a beehive of activities as favour-seeking politicians flock to the mansion to seek the former President's assistance.

A source claimed 'the place is already a Mecca of sorts for all manner of people seeking one favour or the other from Jonathan, like those who want to be in the next ECF, those who want to be governors and those seeking second term in the national assembly. The man is holding court and he seems to be enjoying it.'