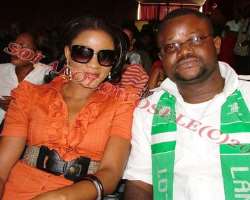 The big budget film which made headlines when it was nominated in the official selection at the Carlow Film Festival, Ireland, late last year was screened recently in Lagos, amid applause.

Speaking on the success of the film that is only out in cinemas, Imasuen, with over 100 Nollywood movies to his credit as a director, said the movie tells the true Nigerian story of hard work and perseverance.

“Home in Exile”, according to him, was shot last year and premiered first at the Odeon Cinema, London. The world premiere was graced by both Nollywood and Hollywood stars and it was well-attended.

At the screening of the film in Lagos, Imasuen said, “It's our own little way of helping to rebrand and reposition the battered image of Nigeria. Parents and their children, especially those living abroad, have a lot to learn from this interesting movie.”

He also hinted that plans are underway to premiere the movie in the United States, Senegal and other African countries.

Imasuen, a proud promoter of Edo language movies, maintained that his latest movie would not be released on the shelves now, adding that he hopes to allow movie buffs have a taste of it first, through the cinemas.

Continuing, Imasuen, the award winning director of several popular Nollywood movies like Issakaba, Last Burial, Ebuwa and a host of others, disclosed that his career as a film maker resolves around using the big screen to address problems that affect the society.