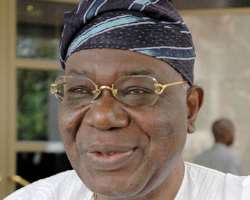 ...African Corruption is Conspiracy of the Elite - Rawlings

He spoke on a day former Ghanaian President, Jerry John Rawlings, said Africa was saddled with corruption due to the connivance of the minority elite to rape the continent. He stressed that such connivance makes it impossible for the positive economic indices to reach the ordinary African at the grassroots.

Shonekan, who speaking at the two-day international conference on ‘Emerging Democracies in Africa: Challenges and Opportunities’ in Abuja organised by the National Institute of Legislative Studies (NILS), observed that democracy will only succeed more in Africa if it improves the conditions of living

of the people.
“It must be noted that democracy does not thrive on empty stomach. Democracy will succeed in Africa, if physical and social infrastructures are improved upon, particularly if there is improvement in the health care delivery, and if there are job opportunities for the teeming unemployed youths across the continent,” he said.

Expressing disgust at the heightening religious fundamentalism, which, he said, is posing serious threat to democracy in some parts of the continent, Shonekan observed that there is an urgent need for the countries to constitutionally separate the state and religion, as well as enforce the provisions of the constitution in this regard.

Shonekan, who maintained that another major challenge to democracy is corruption, said “Corruption debars progress and discourages foreign investors from investing in any country where there is pervasive corruption.”

While noting that democracy is still young and fragile in many African countries, Shonekan, who warned that “the tendency for winners at elections to take all must be checked,” urged losers to lose gallantly, and prepare for the next election in the interest of their countries.

Also speaking at the occasion, former Ghanaian president, Rawlings, said Africa was saddled with corruption due to the connivance of the minority elite to rape the continent. He said such connivance makes it impossible for the positive economic indices to reach the ordinary African at the grassroots.

“Our countries do not fare any better in the annual corruption index of Transparency International (TI). While there may be a lot of factors that enhance corruption, including the connivance of major global international players – whose jurisdictions ironically exact huge penalties for white-collar fraud, Africa is primarily saddled with corruption because some members of a minority elite connive to rape the continent and ensure that the positive economic indices are only on paper, and do not reach the pockets of the ordinary people at the grassroots,” he said.

The former Ghanaian leader, who lamented that the elite get away with tax evasion and misappropriation of state funds while the poor man gets imprisoned for petty stealing, said lip service is continually paid to the strengthening, empowerment and independent management of Africa’s multiple anti-corruption institutions.

“These inequalities are recipes for the retrogression of our democracies, and we cannot allow the negative tide to continue. A democracy that cannot provide socio-economic justice cannot be a healthy democracy, and will remain vulnerable and fragile. Our institutions are weak because we do not strengthen and protect them adequately in our constitutions,” he added.

Rawlings, who observed the attractive opportunities for investment and development emerging democracies present, said “we cannot allow the progress that has been achieved over the past few decades to retrogress because of the challenges we have encountered and (will) continue to encounter.”

It will be recalled that Ernst and Young reported that Africa’s share of investment within Africa rose from 3.2 percent in 2007 to 5.6 percent in 2012.

Rawlings however noted that “The primary challenge for emerging democracies in Africa is the failure of western democracy to acknowledge its inherent flaws and encourage a system of democracy on our continent that is dynamic, home grown and imbued with the socio-cultural backgrounds of individual African states.”