Whats Up with Stephanie Okereke and Linus? 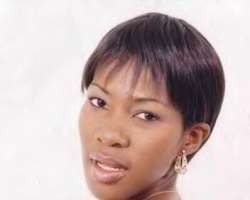 Since Nollywood diva, Stephanie Okereke's marriage to former Super Eagles player husband, Chikelue Iloenyosi crashed two years ago; she has not been romantically linked to any other man, until recently when news of her alleged relationship to an emerging big boy broke. The latest gist about her right now is her sizzling relationship with Linus Idahosa. And both of them have been spotted at major events. Her new love is a CNN Media Consultant and the MD of Del-York International, a media and marketing communications company that offers services that range from advertising, firm, production, events planning, to digital designs and broadcast communication.

Their alleged love affairs, sources say , started after the accident the actress had few years ago on her way to Bayelsa State to attend the African Movie Academy Awards (AMAA) where she sustained injuries. Linus who read about her predicament in the newspaper promptly came to her rescue. After she was treated in a hospital in Port-Harcourt, Stephanie was flown abroad for proper treatment. Though, she was given a huge support by her state Government, Linus was always very supportive of her during that trying period.

After that magnanimous gesture, both of them started getting close and a cordial relationship soon developed but it was nothing serious since she was still happily married to her husband then. But it wasn't long after the accident crisis that her marriage also started experiencing hiccups, and when she couldn't bear it any longer, she sought for the dissolution of her marriage to Chikelue. She claimed that her ex-husband had an extra marital affair. She packed out of the house and moved into her sister's apartment in Lekki in Lagos. It was a big blow to this Imo state born actress at that time, but she did pull through and went low key for a while. Linus was also a shoulder to lean on at a point. Her first breakthrough after her marriage crisis came when she released her movie “Through the Glass” which gave her reasons to be happy once again as the film was rated World Class Movie, a development that also brought a lot of million into her pocket. It was a big come back for her. Since then, she hasn't looked back. She has been very radiant and gradually finding her feet back. But it wasn't long before it came to the fore that the success of her movie is perhaps not the only reason for the glint in Stephanie's eye. The latest is that, she has also fallen in love again and this cute dude no doubt makes her happy.

There have been various instances of these two lovebirds stepping out together as they have been having loads of fun visiting places of interest together. The duos were first seen together last November when Stephanie came to pick him up at the Airport, on a trip home. They were also sighted afterwards at Auto Lounge, the A-List hangout in Victoria Island, Lagos. The way they were holding themselves, dancing and looking into each other's eyes, spoke volumes of their affection for each other. Their most recent outing was at the recently held MNET Face of Africa event which took place on February 6, 2010 at the Eko Hotel Exhibition Centre, Victoria Island, Lagos. They stormed the venue looking like a perfect couple and were in the company of each other, all through the evening.

According to sources, one of the qualities Stephanie likes about this man, apart from his dashing looks, is his well-mannered attitude. He is very calm and has a sense of focus. Apart from stepping out together at some events, Stephanie also plays a key role in the guys business. She served as the Executive Director of one of his companies. Del- York. The company which is now focused on revolutionizing the film making industry via some training has Stephanie also bringing in her acting expertise forward. She is a big fulcrum of support to her man Linus. One of Stephanie's close friends who spoke to our source in her defense claimed that the relationship between the actress and Linus is purely a working one. Tongues are however rife within the same industry that the duo share more than a working relationship.