No N25m compensation for you, Appeal Court tells Baba Suwe 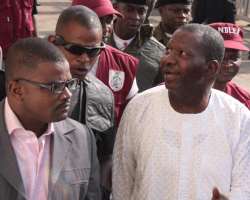 Desire of the popular commedian, a yoruba actor, Babatunde Omidina, a.k.a. Baba Suwe,to enforce the judgement of  low court that award him 25 million damages has suffered a set back.

This followed the ruling of  Court of Appeal, Lagos Division, Friday, which described as baseless and pervasive the award of N25 million compensation to actor by the lower court.

The lower court had awarded  the  actorthe money against the National Drug Law Enforcement Agency (NDLEA).

In a judgment delivered by Justice R.N. Pemu, the court held that the lower court lacked the jurisdiction to preside over the fundamental human rights (FHR) suit filed by Baba Suwe's lawyer, Bamidele Aturu, on October 24, 2011.

Justice Pemu, who said there was no way an FHR case could be heard without going into the main issue, noted that Section 251 of the country's constitution provides that drugs and poison related cases are exclusively for Federal High Courts.

Justice Yetunde Idowu of an Ikeja High Court had ordered the agency to pay Baba Suwe the sum of N25 million for his alleged illegal detention on suspicion of drug ingestion, as well as mandated the NDLEA to tender a public apology to the actor through two national newspapers.

Baba Suwe was arrested by NDLEA men at the Murtala Muhammed International Airport, Lagos on  October 12, 2011, on his way to Paris, France.

He was initially detained for for three days by the agency, during which period he defecated but no drug was found in his faeces.

On October 15, the NDLEA took him to the Lagos State University Teaching Hospital (LASUTH) where a CT scan was conducted on him and the result showed he had elements of hard drugs in his system.

He was subjected to another CT scan some days later and the result of the scan corroborated the one the agency had at the airport as well as the one conducted at LASUTH.

On October 21, the agency obtained an order from the Federal High Court to extend Baba Suwe's detention.

Dissatisfied with Idowu's  judgment, which held that the detention of the actor and the ill treatment meted out to him while in custody violated his constitutionally-guaranteed rights, the NDLEA approached the appellate court on December 16, 2011, urging the court to set aside the judgment.

The agency had argued that the award of N25 million in favour of Baba Suwe was arbitrary and outrageous, adding that the trial court wrongly assumed jurisdiction to hear the suit.

The NDLEA, through its head of legal unit, Mr. Femi Oloruntoba, contended that keeping Baba Suwe in custody between October 12 and 21, 2011 on the suspicion of drug ingestion did not violate his rights.

Both parties adopted their briefs before the appeal panel, which had Justices Chima Nweze, Pemu and F.O. Akinbami on April 18 and judgment was reserved for a later date.

Justice Pemu, who read the judgment held that the NDLEA had good reasons to detain Baba Suwe, adding that the N25 million damage was uncalled for.

She said the result of the CT scans conducted on Baba Suwe were in consonance with NDLEA's suspicion, adding that the agency was conscious of the fundamental right of the respondent, that was why it approached the Federal High Court for extension of time to keep him in custody.

The judge held that the NDLEA acted in line of duty and has the prerogative to detain suspects for investigation as long as it does not exceed reasonable time as enshrined in Section 35(1) of the 1999 Constitution.

Pemu said: 'Contrary to the trial court's position that the detention of the respondent was unreasonable, the appellant promptly approached the Federal hHgh Court for extension of time in order to continue its investigation.

'The detention from October 12 to 21 does not abridge the respondent's right in anyway.

'The issue of damages does not apply. The award of damges can be descretional but such descretion, if necessary, must be based on law.

'In this case, the award of N25 million is erroneous, excessive, unrealistic, pervasive and has no basis. There was no evidence to warrant such award.

'This appeal succeeds and the judgment of the lower court is wrong and hereby set aside.'

However, Aturu, who expressed his reservation of the appeal court's judgment, said they would take the case to the Supreme Court.