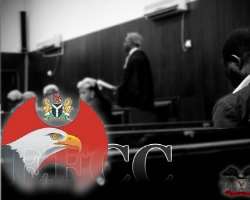 
When the charges were read to them, a translator in Hausa language, Bala Ibrahim Mohammed, who works within the court, translated the charges to the first accused. They pleaded not guilty to all the charges.


One of the charge reads, “That you Ibrahim Mohammed Kamba, Ibrahim Mohammed Bashir, Steve Imokhe and Hassan Argungu on or about the 25th July, 2010 in Abuja within the jurisdiction of the High Court of the Federal Capital Territory, agreed amongst yourselves to do an illegal act to wit: obtain titled documents under false pretences and thereby committed an offence contrary to Section 8(a) and punishable under Section 1(3) of the Advanced Fee Fraud and Other Related Offences Act, 2006”


While adjourning the case to June 26, 2013, for commencement of trial, the judge ruled that the 4th accused person who has been on the run should be remanded in Kuje Prison, as he fixed June 14, 2013, for hearing of the bail application.