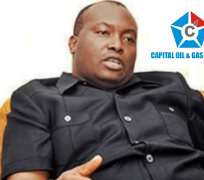 My attention has been drawn to a malicious article with the above caption which was posted on the online medium Sahararepoters on Wednesday, May 15, 2013. In the article under reference, Sahararepoters without any regard to the truth or journalistic ethic wrote concerning me as follows; "Kafarati’s exparte motion today, aimed at interfering with the EFCC’s ongoing investigations regarding Ubah’s involvement in oil subsidy fraud, is reminiscent of the perpetual injunction granted former Rivers State governor, Peter Odili, which has prevented the EFCC from charging him to court for extensive corruption."

In rushing to publish the article the medium did not bother to either see the processes filed in court or sought to hear my side of the story. Sahararepoters also deliberately distorted the order made by the court by claiming that the court granted me an exparte injunction which is "reminiscent of the perpetual injunction granted former Rivers State governor, Peter Odili, which has prevented the EFCC from charging him to court for extensive corruption". Nothing can be further from the truth.

I do not need any perpetual injunction from prosecution by the EFCC or any prosecutorial agency of the government as I have nothing to hide. I instituted the action against the EFCC because the so-called investigation relates to a matter in respect of which I have been investigated and cleared by the Special Fraud Unit of the Nigeria Police Force and a judgment of the Federal High Court. The investigation is therefore a mere witch-hunt with political undertones.

I brought the above action in court because of my firm conviction that the so-called investigation was a witch-hunt intended to force me out of the gubernatorial race in my home state of Anambra. It is instructive to note that since about March 2013 when I declared my intention to contest in the Gubernatorial election in Anambra State scheduled for 2014 as well as commenced consultations towards realizing the ambition there has been no let up in the use of every machinery of state to intimidate me into withdrawing from the race. This is not surprising as the current Governor of the State is a known acolyte of some members of the Federal Executive Council of the Federal Republic of Nigeria and therefore has influence over some Government Agencies especially the EFCC.

I had earlier honoured an invitation by the EFCC and was billed to return to their office on May 13, 2013 but I was however reliably informed by an operative of the EFCC whose name I cannot divulge that upon my return I would be detained and then taken before a court in Abuja upon charges already drawn up rehashing the allegations which were investigated by the House of Representatives and the Special Fraud Unit of the Nigeria Police and from which my company and I had already been exonerated of any reasonable suspicion of commission of any criminal offence.

I was also informed that my planned detention and or arraignment are designed to stop me from contesting in the said Gubernatorial elections for the Governor of Anambra State and/or to so publicly malign me so that I would lose all credibility before the electorate and lose the election. In furtherance of this plan to persecute, detain, arraign me in order to publicly embarrass me and impede my ambition to run for public office, the EFCC had earlier sent a team of 20 armed operatives to arrest me on the 30th of April 2013 and briefly detained and interrogated me when I later reported to the EFCC office.

I therefore had no other option than to go to the court since i had been cleared of any wrong-doing after a thorough investigation by the police. There was therefore nothing untoward in the court staying all actions pending the outcome of the suit since the peculiar facts of the matter justify the grant of the interim relief sought. In granting the order the court was amongst other reasons persuaded by my deposition that Capital Oil & Gas Industries Limited was maliciously and wrongly indicted by the Presidential Committee on on Verification and Reconciliation of Subsidy Payments to Petroleum Products Marketers [PCVRSPPPPM]) as a result of disagreements with Acces Bank Plc, Coscharis Motors limited, Aigboje Aig- Imokhuede (Managing Director of Access Bank) and Cosmas Maduka (Managing Director of Coscharis Motors Limited, Director and Chairman Credit Committee of the Board of Access Bank)) in 2012, over a joint venture arrangement involving importation of Petroleum Products. In support of the above, I also stated that Mr. Imokhuede and Chief Maduka decided to use the opportunity of the appointment of Mr. Imokhuede (as Chairman of the Presidential Committee on Verification and Reconciliation of Subsidy Payments to Petroleum Products Marketers [PCVRSPPPPM]) to witchhunt Capital Oil and me.

It will interest the general public to note that as I stated in the court processes, the witchunt formed the basis of a report which was made by Mr Imokhuede’s Committee and Chief Maduka to the Commissioner of Police in charge of the Special fraud Unit of the Nigeria Police who was a member of the said PCVRSPPPPM and he proceeded to write interim reports which he claimed found me complicit in various offences even though no thorough investigation was conducted at that stage and he caviarly rejected documents which exonerated us of any wrong-doing.

Being aggrieved with the Presidential Committee and SFU reports, I instituted action in Suit No. FHC/L/CS/07/2012 in respect of which the Federal High Court delivered a judgment on the 18th of February 2013 declaring inter alia that “.. as the complaints made by the Presidential Committee on Verification and Reconciliation of Subsidiy Payments to petroleum Products Marketters under the control of the 3rd Respondent and by the 4th Respondent (in respect of purely civil contractual disputes between him and the Applicants) and purportedly investigated by the 2nd Respondent, grossly infracted upon the fundamental rights of the Applicants, no law enforcement agency whatsoever is at liberty and/or can validly act on the said complaints.

Before judgment was delivered in the said Suit No. FHC/L/CS/07/2012, the Special Fraud Unit of the Nigeria Police Force (having now conducted an impartial and objective investigation of the allegations made by the PCVRSPPPM against me and my company) by a letter addressed to the Honourable Minister of Finance of the Federal Republic of Nigeria on the 12th of February 2013 submitted the report of their investigations and requested the Honourable minister to “go ahead to process claims for payment of outstanding subsidy to the firm” based on the conclusion in their report that “After due analysis and considerations of the team’s findings, we found out no inference of a prima facie case of alleged offences”.

Having been cleared of the allegations of wrong-doing by the Police as well as the court, what then is the basis of the EFCC investigation of the same matter if not a witch-hunt?. Should a court stand idly by and watch the EFCC trample on the rights of an individual for fear that that likes of Saharareporters and EFCC would malign him in the court of public opinion without dislosing the full facts of the case?. EFCC should stick to the facts and desist from the obnoxious tactic of castigating judges on the pages of newspapers in order to intimidate them into giving a judgment or decision acceptable to her. Truth is constant. The hard-earned reputation of judges should not be dragged in the mud as they do not have the liberty of publicly defending themselves. Any person who feels aggrieved with a judicial decision should follow the legal process to appeal against same or apply to set same aside. Petition writing as should be known by the EFCC is not a mode of appealing against or applying to set aside an unfavourable judicial decision.

I leave you to be the judge of this matter. These in a nutshell are the reasons why I approached the court. For ease of reference the following are the relief I seek from the court;

1. A DECLARATION that the judgment of the Federal High Court in Suit No. FHC/CS/07/2013 delivered on the 18th day of February 2013 in favour of the Applicants, the exoneration of the Applicants by the House of Representatives committee investigating fuel subsidy fraud, a letter dated the 12th of February 2013 being a response of the Police Special fraud Unit ‘D’ Dept. to the Minister of Finance forwarding a report of investigations into allegations of subsidy fraud made against the Applicants and clearing them of any criminal complicity whatsoever, collectively tantamount to a complete and final exoneration of the Applicants from any reasonable suspicion of commission of any criminal offence with regard to application for and receipt of subsidy payments under the Federal Government of Nigeria Petroleum Support Fund (PSF) scheme.

3. A declaration that the current inquisition, persecution, threatened detention and/or prosecution of the Applicants by the Respondents for reasons of stultifying, impeding or otherwise truncating the 1st Applicant’s declared intent to run for public office in Anambra State is ultra vires the Respondents, illegal null and void and an infringement of the Applicants’ fundamental rights enshrined in Article 13 of the African Charter of Human and People’s Rights.

4. An order of perpetual injunction restraining the Respondents from further action with respect to the allegations of subsidy fraud which have already been investigated by relevant Agencies of Government, the House of Representatives Committee and from which the Applicants have been cleared of any reasonable suspicion of commission of criminal offence and in respect of which the judgment of the Federal High Court in Suit No. FHC/L/CS/07/2013 was delivered on the 16th of February 2013 in favour of the Applicants.

5. An order of perpetual injunction restraining the Respondents from persecuting, detaining, threatening to detain or prosecute the Applicants in respect of allegations of subsidy fraud in respect of which the Applicants have been cleared of any reasonable suspicion of complicity by relevant Government Agencies, the House of Representatives and the judgment of the Federal High Court in Suit No. FHC/L/CS/07/2013.