Talented, but refused to drop out 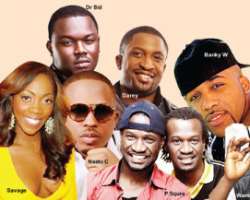 In a season when some artistes are dropping out of school to embrace music, others have proved they could combine development of their talents with schooling, writes CHUX OHAI

Many years ago, parents didn't like children who preferred a career in music to medicine, law or engineering. Musicians were generally regarded as occupying the lowest rung of the social ladder and, so, they were hardly respected.

Although they worked hard at their chosen vocations and sometimes, travelled far beyond these shores, many musicians were hardly seen as useful members of the society. Most of the time, they were dismissed as social misfits.

Unfortunately, time has not completely changed this perception. Nowadays, there appears to be an increase in the number of youths dropping out of school to take up a career in music. While some of them have always said their passion for music was the reason why they quit the classroom for the recording studio, others put the blame on poverty and other challenges.

But a courageous few have managed to resist the temptation to push aside their education and embrace the glamorous life style of music artistes. With some now armed with Master's degrees in various disciplines, they have emerged as successful and highly respected artistes with a wide fan base across the country.