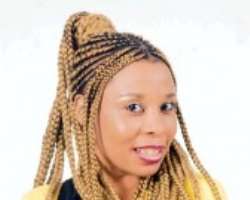 Pretty actress and Boldfaces presenter, Tricia Esiegbe, and another Nollywood actress, Oby Edozie, used to be best of friends until some time ago when the two became sworn enemies because of 'man palaver'.

Their bitter quarrel made the headlines as both of them called each other names on the pages of newspapers and they never saw eyeball to eyeball for more than two years.

But it looks now as if the 'war' is over.

Reliable sources told Life and Beat that Tricia and Oby have become best of friends again.

A source close to the two said that Tricia made the first move when she called Oby shortly before her (Tricia's) mind blowing wedding held late last year.

According to the source, Tricia begged Oby to forget about the past, saying that they should carry on as they used to do before the misunderstanding.

”Oby accepted the olive branch. She even spoke to Tricia's husband who also advised the two actresses to bury the hatchet and carry on as they used to do,” the source said.

Life and Beat gathered that to show that she had buried the hatchet indeed, Oby made some souvenirs which was shared to many people during Tricia's wedding.

”Now, they are back together and there is no more rift between them. I thank God their rift is over. I hope they remain like that and not allow any silly misunderstanding to break them up again,” said the source.

Confirming the story, Oby told Life and Beat that she had made up with her friends but would not going to go into any details concerning how they made up. Tricia, however, was unavailable as her phone was switched off.

Story by The Punch