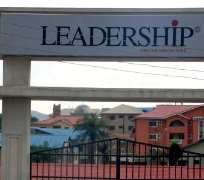 SAN FRANCISCO, May 02, (THEWILL) - The Federal Government on Thursday dropped the case it instituted against two LEADERSHIP journalists as well as their employer.

The notice of withdrawal/discontinuance of the six-count forgery charge dated April 30 was filed by Chief Adegboyega Awomolo (SAN), private prosecutor on behalf of the Attorney General of the Federation and Minister of Justice, Mohammed Bello Adoke (SAN), on Thursday.

The journalists however pleaded not guilty to the charges and consequently, the court presided by Justice Adeniyi Ademola granted them bail in the sum of N500,000 each, with one surety each, who must have landed property within the jurisdiction of the trial court and must swear to affidavit of means.

The trial judge also adjourned the case to May 16 and gave the counsel to the journalists three days to file their preliminary objection, while the Federal Government had two days to reply.

But the Federal Government’s withdrawal notice on Thursday read: “Take notice that the complainant, the Hon. Attorney general of the federation intends that the criminal proceedings consisting 6-counts charge against the accused persons, Tony Amokeodo, Chibuzor Ukaibe, LEADERSHIP Group Ltd, be discontinued and the 6-counts against them are hereby withdrawn.”

The withdrawal came as the counsel to the journalists, Mr. Femi Falana, SAN, filed a notice of preliminary objection challenging the competence of the charge and the jurisdiction of the court to hear and determine the complaint.

In the notice of preliminary objection , Falana said the court lacked the requisite jurisdiction to entertain and determine the complaint against the journalists as presently constituted and consequently seek an order of the court dismissing it.

Falana based the application on the ground that the charges against the accused persons related only to forgery and not to any loss of revenue by the Federal Government and therefore were not eligible to be tried at the Federal High Court .

According to Falana, “In the instant case, the charge brought against the accused persons discloses no loss of revenue by the Federal Government to cloth the Federal High Court with the jurisdiction to entertain same.

“The instant complaint is limited only to forgery, for the Federal High Court to have jurisdiction over same, it most also involve or relate to loss of revenue by the Government.

“That statement of offence does not bring the instant matter within the jurisdiction of the Federal High Court.”