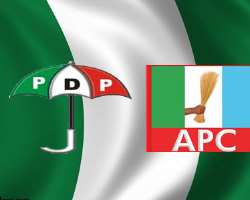 SAN FRANCISCO, April 20, (THEWILL) – The Peoples Democratic Party (PDP) has lambasted the opposition All Progressive Congress, APC, as a bunch of comedians who are simply entertaining themselves in their dream world.

Describing the new logo of APC as a very poor imitation and bland parody of the PDP manifesto, the ruling party in a statement issued on Saturday by its National Publicity Secretary, Chief Olisa Metuh, said that it is laughable that the opposition thinks that victory which only hard work begets will now cheaply be offered them by chance and , perhaps, media bombast.

According to Metuh, “The leaders and members of the APC are entertaining themselves. The opposition are in their dream world. They are in deep slumber but will soon wake up to the stark reality that it takes more than noise making to defeat the PDP, the only truly national political party in Nigeria, with impregnable structures in every polling booth, every ward, local government and every state of the federation. They will wake up on the eve of 2015 and see us once again in power."

He said “those who recited the parable of the bloody baboon and monkey and other fellows who pledged the impossible in desperation, may engage demagoguery to throw the state into chaos.

Nigerians are however wiser!"
The PDP maintained that it had not only laid the foundation of a solid institutional framework for war on corruption but has over the years demonstrated its zero tolerance for the plague.

"Our government established the EFCC and the ICPC, equipped them with canine and molars to crush the backbone of corruption. As relative as their successes are, no record will ever deny their impact in quest for

a transparent polity. It suffices that the PDP has shown enough dispassion in fight against corruption and will continue to encourage all Nigerians, especially the opposition to do same," the statement said.

It maintained that the PDP was not afraid of the probe of the activities of its leaders since 1999 but asked the opposition to prove itself by taming the regime of corruption in the few states it controls as a demonstration of its fidelity to the anti corruption cause.

“The PDP is not afraid of probe. This is one of the major reasons our government established the Freedom of Information Act so that every Nigerian can be a watch dog, well armed with facts to challenge impunity. But right under the nose of the leaders of the opposition are taxpayers money, state property defiled and pillaged to satisfy the greed of one man- the self styled leader, the Pontifix Maximus. We urge the opposition to start the probe here as an earnest of its commitment," it said.

The statement added that it was another opportunity to alert Nigerians to the antics of these politicians who have come once again to remind them of their religion and of their tribe, " the factors that long kept our dear nation down; the very factors that the PDP relegated to insignificance in the last fourteen years as a broad based, nationwide and issue based political party."

According to Metuh, “Much of this played out at their just ended national convention in Lagos. It promised a jamboree and ended up a jamboree of futile imagination from clueless and disparate forces. It was all noise and no deep thought. What the Zik of Africa would call ‘panjandrum.’

“Besides, we have again seen this in their so called 8-agenda manifesto where they offered nothing new. The unstated which we however wish to alert all Nigerians is the use of religion and tribe to divide them. It is their stock in trade."