Foluke Daramola! She Is Our WIFE: Kayode Salako's Family Speaks On His Marriage 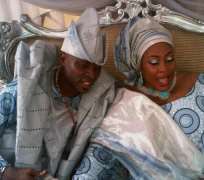 Foluke Daramola-Salako is our brother's recognised wife - 'juju' tale or not and we accept her like that!
About 16 men of God also attended our brother's wedding to Foluke Daramola-Salako on the 15th of March to witness and conduct the traditional solemnization ceremony.
Were all these men of God also jazzed by Foluke, if she has 'jazzed' all of us, the family members already?

The fact is that where our brother deserves maritally is where he has just discovered now. Where he actually belongs is where he is right now. But the world can never understand just the way they never understood the mystery of our Lord and saviour, Jesus Christ, when he was here very close to us.

On this note, our attention has been drawn to series of calculated and orchestrated attacks on our brother's marriage to Foluke Darmola-Salako and we affirm that it is just all a gang up and a war by the forces of the darkness that have held his destiny captive for a long time before now, and we believe princess Fasuyi belongs to the camp of these devilish people, plotting to send our brother back to the Egypt.

The world should tell 'Pastor' Bukola, our brother's ex-wife to come back home now that the world has been told the 'childish secret' of what sent her out of 'her' home and the potency of Foluke's ' pseudo 'juju' has expired, if her pride and character bankruptcy can, because our brother never sent her out of the house in the first place.

The question is, how many married women who are pastors has juju sent out of their matrimonial homes in a hurry. What happens to her spritual power and her prayer as a woman of God? Why should the power of foluke's so-called mere 'juju' send away the power of 'God' in a pastor and up till now the power is still keeping her outside her home?

The world should ask her the type of power she possesses herself and the type of God she claimed to be serving, when she was in our brother's life.

There are so many things the world does not know that we, Mr. Kayode Salako's family members know about his first marriage. So, we are not blaming our brother for deciding to settle down with another woman when the opportunity was provided by the creator of marriage Himself.
Afterall, every man deserves to be happy and our brother cannot be an exception.

The point is, our brother, never had a wife in whom he was fulfilled. This is a woman who had no relationship with any member of our family, including her own supposed husband and painfully our father, who has been around alone to bring us up since about 30 years ago.

Pastor Bukola hated our father with passion and claims to be a woman of God. Our brother as a 'married' man was merely living outside and only comes home to sleep most times.
Maritally, he had strayed away and God has brought him to his destined wife, Foluke Daramola-Salako.

And we want to say it will not be too long before the world would start congratulating our brother for taking the bold step of taking the bull by the horn at the nick of time.

Right now, the world can be quick to judge or castigate Foluke as a star for being involved in all of this controversial tendencies, but that is just the price she has to pay to fight and possess what belongs to her.

However, we in the Salako family are welcoming her wholeheartedly once again into our family and wish her the very best of luck with her destined husband, our beloved brother, Olukayode Salako, the pride of our family and a very kind, struggling and forthright man, who contributed to our upbringing, social-well being; education and the greater heights all of are today.

We say boldly that our brother is a very good man who cannot continue to live with a sadist and a lifeless woman.
Princess Bukola Fasuyi is only representing the constituency where she belongs or spiritually compatible, the camp of the agents of the devil. They have tried to destroy our brother's happiness, his marriage to Foluke, spiritually, but to no avail. now, they have resulted to go physical and the Nigerian media is the weapon and Bukola Fasuyi is the paid agent.

They have failed! This is the wish of God for our brother and there is nothing any satanic force can do.

So, we, on behalf of all the Salako family, where Mr. Olukayode Ezekiel Salako hails from, hereby dissociate ourselves from the malicious and satanic confessions of that Princess Bukola Fasuyi, an agent of the devil, a prostitute and an indian hemp smoker, concerning all the unthinkable things she has been saying about our brother's marriage to Foluke Daramola-Salako.

And we condemn all her senseless vituperation and unanimously declare her an enemy of our approval for our brother to marry properly and settle down peacefully wit his real wife.

We do not believe all she has said because, our own 'holy spirit' has not told us Foluke possesses diabolic tendencies that can disqualify her from being a bona fide member of our humble family. So far, Foluke has proved to us that she is not only a very responsible and cultured Nollywood pride, but a seasoned and thorough bred woman, who can handle an ideal home.

Since she got married to our brother, all of us noticed he has been happy. On this note, it is on our brother's mandate to continue to live a happy and fulfilling life that he will always deserve we stand!
Once again, Happy Married life our Mr. Kay!

-Olusegun Michael Salako, Maryland USA, on behalf of all his brothers and sisters, home and abroad, who will always respect and love him passionately