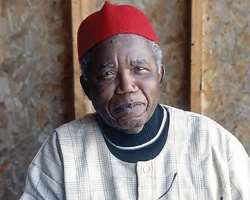 Unlike everyone else, my initiation into the world of Prof. Chinua Achebe did not start with Things Fall Apart; neither did it start with A Man of the People, it started with reading the summary of Anthills of the Savannah.

As an Art student in high school, Anthills of the Savannah was one of the recommended novels for my set. During those periods, there was not much money to buy all the recommended text books and novels; and not even second-hand copies which are easily accessible and cheaper.

Not reading the recommended books is a panacea for gallant failure! It was a catch22 situation!

As preparation for my exam moved into top gear, I got hold of the summary and digested it. Not quite long afterward, one of my colleagues bought all the recommended novels, plays and poems! I didn’t hesitate to get the books from him and devour it.

Having read the summary on several occasions, it was not hard to understand the plot and themes of Anthills of the Savannah. Reading the original text served the purpose of broadening my knowledge of the book.

During those periods, I used to read after school hours at Henry Carr Public Library, Iloro, Agege, Lagos. The library is a stone throw from my school. Though not properly and adequately stocked, I would go round the shelves each day I come and find some interesting books to read.

I read a number of books in that library. After my house, Henry Carr Library became my second home.

And on a particular day, I came across Prof. Achebe’s A Man of the People on the shelf and immediately, I read it through from cover to cover. After that, I moved to the next one I saw, Arrow of God.

In quick succession, with simplicity of language and rich proverbs, I was ushered into the world of Prof. Achebe!

As the curtains draws on the life of this great man of the people, I wished I had met him in flesh and blood!

In honor of this great man, I think the National Assembly and the Presidency should, as an urgent matter of national importance, declare his date of birth, a day of literary appreciation where Nigerian of all ages would have an opportunity to appreciate his life and works.

Also, if a monument is to be named after him, I think the national library should be named Prof. Chinua Achebe National Library. How does that sound? I think it sounds nice!